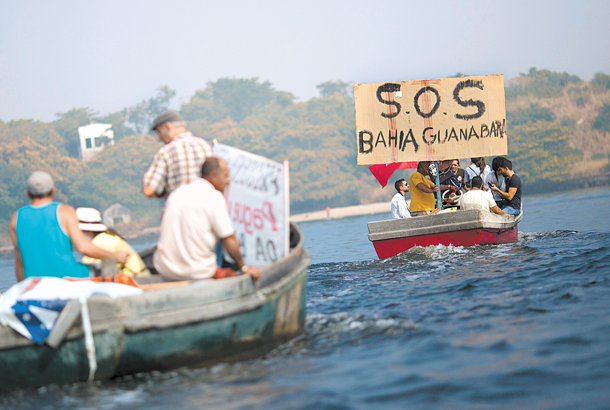 Brazilian fishermen protest the pollution in the Guanabara Bay, in Rio de Janeiro, Brazil. Rio state officials have acknowledged a real cleanup of Guanabara will take 20 years after organizers promised to do it for the Olympics. [AP/NEWSIS]

No Olympics in the past has escaped media criticism. The 2008 Beijing Olympics, for instance, received major coverage regarding problems such as air pollution and corruption. Likewise, the Summer Games in Rio de Janeiro, Brazil, this year are under heavy scrutiny due to a number of issues such as water pollution, security concerns and the Zika virus, to name a few.

One of the issues that came under limelight once again recently is the polluted waters at Guanabara Bay, a venue where various aquatic events such as sailing and windsurfing will take place. The New York Times last week raised concerns regarding the matter, saying some locals have even spotted corpses in the waters.

Ongoing research conducted by various institutions can attest to the contamination of the bay, some finding drug-resistant “super bacteria” that are normally found in hospitals.

“Foreign athletes will literally be swimming in human crap,” Dr. Daniel Becker, a local pediatrician, told The New York Times, “and they risk getting sick from all those microorganisms.”

The main causes of the pollution include uncollected trash and human waste thrown into the bay via polluted rivers and slums along the coastline. The gravity of the issue leaves many athletes distraught about their participation, especially after August of 2015 when a German sailor Erik Heil alledgely was infected with multi-resistant bacteria after participating in a testing event at the waters.

While sailors and swimmers are worried about their health, for spectators around the world who gather at Rio, it is their security that leaves them distressed.

When Rio was bidding for the Olympics, Rio's mayor admitted that security concerns are serious. But he also said that such concerns, which he notified the International Olympic Committee (IOC), will be taken care of by the time the Olympics come around.

The IOC supported Brazil and its ability to address the issue before the Games. Mark Adams, an IOC Spokesman, told The Associated Press, "We have confidence in their capacity to deliver a safe Games in seven years. Security is of course a very important aspect of any Olympic Games no matter where it is in the world."

According to an Associated Press report in late June, the number of killings in Rio de Janeiro saw a hike to 2,036 from January to April this year, in comparison to 1,818 during the same period in 2015. Concerns of terrorist attacks also loom large with the recent attack in Nice, France, in mid-July, as well as many other places around the world.

Another major issue that leaves many skeptical about the success of the Summer Games in Rio is the outbreak of the Zika virus.

Anyone can be infected by the virus via the bite of an Aedes mosquito, its main carrier. Possible symptoms include fever, rash, joint pain and conjunctivitis, according to the U.S. Centers for Disease Control. But these symptoms can be so mild that patients often don’t even realize they’re infected. At the moment, there is no vaccine or medicinal treatment, although the mortality rate is extremely low. Nevertheless, the disease is feared as it may lead to microcephaly in babies, a medical condition causing incomplete brain development.

Many renowned sports stars such as golfer Jason Day have already pulled out of the Games, citing Zika. National Basketball Association (NBA) star Stephen Curry of the Golden State Warriors also withdrew from the Olympics. Although he didn’t attribute Zika as the reason, critics say that the epidemic must have been one of the reasons behind his decision.

Such issues are just a tip of the iceberg when it comes to the controversies the Rio Olympics are facing. Other issues such as political turmoil and economics crisis also leave spectators in distress. Even so, athletes and fans around the world will watch intently, fingers crossed, as the first Summer Games to take place in Latin American in half a century soon begin.