The death of the central bank

The death of the central bank 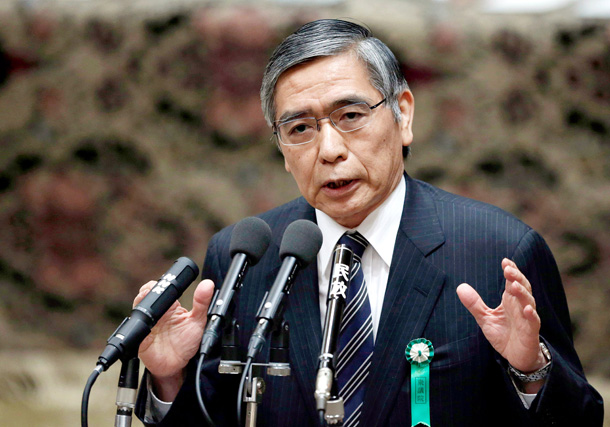 Bank of Japan Governor Haruhiko Kuroda last Friday insisted that he wasn뭪 done yet ?there were more bonds to buy, more rate cuts to try. [NEWSIS]

For the past 70 years, Japan has been a crucible of experimentation in economic policy. During its go-go years, Tokyo’s unusual practices to spur rapid growth became a model for much of the rest of Asia, while its unconventional attempts to revive its post-bubble economy have helped economists understand what should and could be done to recover from financial crises.

Now Japan may be offering the world yet another lesson in economics — on the outer limits and ultimate effectiveness of monetary policy itself.

Bank of Japan Governor Haruhiko Kuroda disappointed investors on Friday when he offered only a minor boost in his asset-buying program as his latest effort to beat deflation and raise growth. With talk of “helicopter money” and other exotic strategies, many had convinced themselves that the BOJ would try to surprise markets with a much more dramatic decision. Voices immediately called for greater action. “We still expect the Bank to do more,” wrote economist Marcel Thieliant of Capital Economics in a Friday note.

In his press conference, Kuroda insisted that he wasn’t done yet — there were more bonds to buy, more rate cuts to try. But the truth is, at this stage, three years into his radical program to restart Japan, the BOJ might just be a spent force. As HSBC economist Frederic Neumann put it in a Friday report: “Today’s decision suggests that the BOJ has reached the limits of its current policy framework.”

Kuroda has already thrown everything into his fight to save Japan. Through his extensive program of quantitative easing, his bank now holds a third of all outstanding government bonds, and some experts believe there are limits to his ability to buy more and more of them.

Yields on many of these bonds are already negative, which means the investors who are lending their money to the government are paying for the privilege. The total assets of the BOJ have more than doubled in the just the past three years.

Even if Kuroda could expand the easing program, there’s little reason to think it will make a big difference. At this point, further rate cuts or more bond-buying would only be on the margins of his actions thus far. And those haven’t gotten the BOJ very far. By one key measure, the economy sunk deeper into deflation in June. Earlier this month, the International Monetary Fund reduced its growth forecast for 2016 to an anemic 0.3 percent.

The fact is that BOJ can pump out as much cash as it wants, but unless companies and consumers use it to invest and spend, Kuroda’s “bazooka” can only fire blanks. The government simply hasn’t advanced the critical reforms — from deregulation to labor market repair — that would unleash new opportunities and convince investors to borrow, build and create.

Arguably, the case could be made that Japan would be much worse off without Kuroda’s experiments. But with so much largesse creating so little positive effect, we at least need to question if further easing could achieve that much more. In fact, greater action could have a damaging effect, by further straining banks and punishing savers. And those concerns are only going to grow over time. Kuroda may need to pretend he has unlimited room to maneuver in order not to spook markets. But he’s running a high risk of underwhelming them again, given the very real constraints on action.

There are uncomfortable lessons here for other central bankers. Mario Draghi, president of the European Central Bank, is, like Kuroda, under constant pressure to take more drastic steps to stoke inflation and growth. But Kuroda’s experience should act as a warning that his bank may eventually hit a ceiling as well. In China, where policymakers are easing money to spur growth, the BOJ’s traumas are clear proof that expanding cash without implementing true structural reforms only goes so far.

Kuroda’s only hope may be to tinker further with his unorthodox policies and take even more radical decisions — such as lending to banks at negative rates. Perhaps Japan will continue to be a laboratory of economic innovation. The results, though, are likely to be sobering.