Throwing dirt toward the wind

Throwing dirt toward the wind 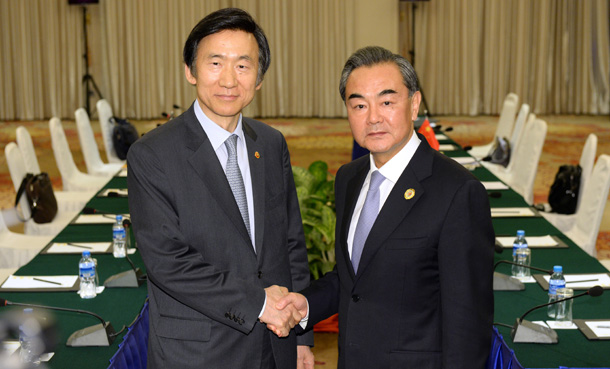 South Korean Foreign Minister Yun Byung-se meets with his Chinese counterpart Wang Yi in Laos over the deployment of the Terminal High Altitude Area Defense antimissile system in the South. Wang raised a strong complaint about the deployment. [MINISTRY OF FOREIGN AFFAIRS]

Last month, I traveled the North Korea-China border region on the Chinese side. Trucks and trains crossed the many bridges over the Duman River and Amnok River (Yallu River). I saw the high-end shopping center in Dandong, the biggest city of border trade filled with global luxury brands. It was only 300 meters (984 feet) from the Amnok River bank, where North Korea was visible. The scene could incapacitate the UN Security Council resolution to ban luxury goods imports to North Korea.

It is not easy to crack down on unofficial traders who are buying a few banned items and heading back across the Amnok River. In fact, it wasn’t so hard to run into North Koreans wearing Kim Il Sung and Kim Jong-il badges in Dandong Station or nearby stores. They are human traffickers. China has left the lifeline of trade with North Korea open, and North Korea is holding on just fine. Dandong illustrated the solemn reality that without the cooperation of China, sanctions on North Korea, safety of defectors and progress in inter-Korean reconciliation will not be easy.

Some Chinese say the country should launch an economic retaliation against Korea for accepting the deployment of the Terminal High Altitude Area Defense (Thaad) system at a U.S. base in Korea. China is considering South Korea — not North Korea — as a target for an economic strike. But can China really inflict damage on South Korea?

From Korea’s standpoint, China is the major trade partner as the biggest exporter and importer. More than 25 percent of Korea’s total exports go to China, followed by 5.6 percent to the United States, 4.8 percent to Hong Kong and 4.2 percent to Singapore. The significance of China’s position in Korea’s trade is well known. If China interferes, the Korean economy would suffer.

But let’s also look at what Korea means to Chinese exports. Korea is the fourth largest export market for China at 4.3 percent, after the United States (16.9 percent), Hong Kong (15.5 percent) and Japan (6.4 percent). Also, China accounts for 17.1 percent of Korea’s total imports, about the sum of imports from Japan (10.2 percent) and the United States (8.7 percent) combined. China is Korea’s major customer, but Korea, too, is a customer of China.

More important, Korea is the biggest importer to China. Almost 10 percent of China’s total import comes from Korea, followed by Japan (8.3 percent), America (8.1 percent), Taiwan (7.8 percent) and Germany (5.4 percent). Also, we need to acknowledge that considerable parts of goods imported from Korea are necessary intermediary goods such as semiconductors, parts and materials for the products that China exports. Simply put, the two countries are economic partners sharing a common destiny working like cogwheels.

So, if China economically retaliates against Korea, it would be what Buddhist scripture Agama describes as “throwing dirt towards the wind.” In order to make Korea suffer, China must endure loss as well. As the 13th largest economy in the world, Korea is one of the few global partners that can bring mutual synergies with the Chinese economy. If Korea falters, it is not good for China either. While China claimed “if the lips are gone, the teeth will be cold,” and sided with North Korea, China’s lips are South Korea, not North Korea, now that economic cooperation is in full swing.

Moreover, China’s economic prospects aren’t so promising this year. Exports in the first half were $997.5 billion — a 6.9 percent drop from the previous year. Imports decreased 9.6 percent to $701.3 billion. At this juncture, starting a trade friction with Korea is self-injury. Is there any reasons for China to take such a risk when economic growth is desperately needed to keep their system stable? Korea, too, heavily relies on the economy for the administration’s stability. The two countries need to seek solutions based on mutual understanding.

The Korean government needs to recover confidence in diplomacy with China. Seoul needs to ask China what it considers important. Instead of being confrontational with Korea, China could benefit by focusing on persuading North Korea — its neighbor launching missiles despite the international community’s strong oppositions. It is only fair if China still maintains the position of considering peace and stability of the Korean peninsula as a core interest. Korea and China are neighbors that will continue to coexist.