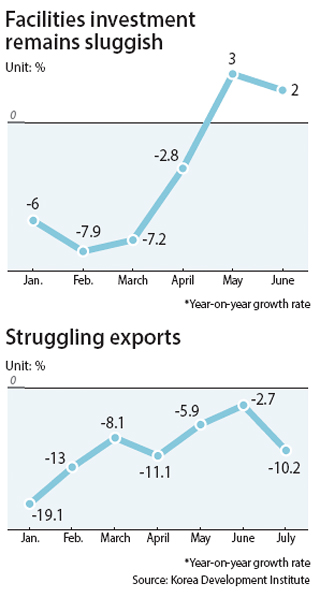 A state-run think tank warned that the economy is still tepid, although sluggishness in domestic demand indicators, including retail sales and construction investment, has moderated.

Retail sales and the value of completed construction projects improved significantly compared to a year ago. However, manufacturing production remains stagnant with exports and facilities investment lagging compared to the past, the Korea Development Institute (KDI) said Thursday in a monthly analysis.

“Retail sales and services exhibited increased growth due to the base effect from the Middle East respiratory syndrome in June last year and a temporary rise in motor vehicle sales, thanks to the extended individual consumption tax cut,” the institute said in its report.

In fact, retail sales in June rose 8.9 percent year-on-year and services increased by 5.4 percent during the same period.

By item, durable goods continued a favorable upward trend with 13.5 percent year-on-year increase, largely thanks to the increase in passenger car sales (19.9 percent). June was the last month of an extension of cuts in the individual consumption tax on vehicles.

Facilities investment, or investments in equipment and machinery, rose 2 percent year-on-year, mainly in the motor vehicles sector, which grew 28 percent during the same period. However, investments in machinery fell 8.5 percent, continuing the previous month’s decline of 4.3 percent.

Construction investment, on the other hand, continued to grow. The value of construction projects completed was up 18.5 percent with continued growth in both civil engineering and building construction, the KDI said.

The labor market improved in June compared to the past.

“Employment growth in manufacturing declined sharply but in services it accelerated due to the base effect, helping to temporarily ease the recent decline in overall employment,” the KDI said.

The data showed that about 354,000 people found new jobs, up 1.4 percent compared to the previous year, and the think tank said those jobs came mainly from the services industry.

June’s rate of labor force participation was 62.5 percent and overall employment hit 60.2 percent, both up 0.2 percentage points from the previous month.

July’s composite consumer sentiment index recorded 101, marginally above the baseline of 100 and higher by two points compared to the previous month. The KDI said it rose as most indicators related to households’ economic conditions advanced.

Meanwhile, the KDI surveyed 21 major local think tanks and financial institutions and said that domestic forecasters expect the Korean economy will grow 2.6 percent this year and a similar amount next year.

According to the KDI, survey respondents projected exports will stagnate next year with growth of 1.98 percent and the unemployment rate to remain in the mid-to-high 3 percent range this year, which is higher than last year.