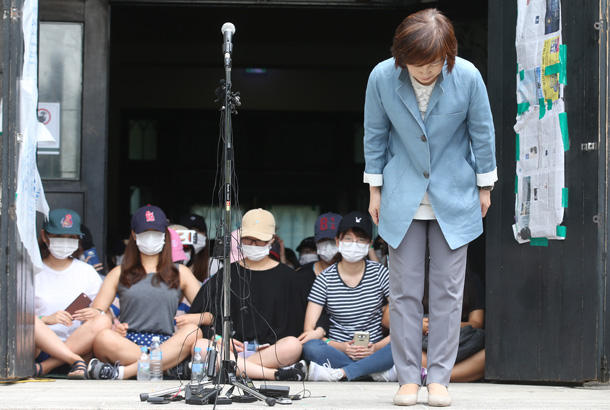 The situation at Ewha Womans University is made up of multi-layered controversies over communication, academia, professions, university finance and perceptions of academic backgrounds. And the song they sang makes us think about what caused the sit-in. They did not choose to sing a protest song.

When the anxiety climaxed, they chose to sing “Into The New World” a hit song by Girls Generation. It is a song that has never been interpreted to have social meaning. But the reason for the selection was simple. “It’s the song we can all sing together.” “Close your eyes and feel the moving heart and my eyes on you” may sound sweet. But there are also some meaningful parts in the lyrics, “Unknown future and the walls don’t change, but we can’t give up.” They refuse the factional association of protest songs, though.

The questions on the Ewha Womans University incident begins here. How could hundreds of students who are so individualized that they can’t sing an activist song at once get together here? How could they join hands and form a barrier against the police forces? The behavior of the unorganized organization was different from an organized group. The students posted the progress real time on Facebook.

But they asked the media to remove photos where students can be identified. Many of them were highlighting “forcible suppression,” and the students may want to use them to advocate their cause. But the students had a firm stance on the privacy of the participants. Only those with school IDs could enter the protest site, and they wore hats, sunglasses and masks for press conference.

Unorganized organization is not limited to Sinchon. The Occupy Wall Street protests in New York in 2011 are quite similar. The rallies were proposed on social media, and individuals participated, and the police suppression spread the issue. Polls and media failed to predict Brexit and made a wrong guess on the April 13 general election because they overlooked the unorganized organization. Trump’s

popularity is also supported by those far from traditional political influences.
There are clues to understanding unorganized organization. The individuals get together, but the core idea is “me,” not “us.” If organization is based on ideology, unorganized organization is built on interests. They are not materialistic. It means that they have desperate and realistic reasons to act. Occupy Wall Street was ignited by employment. It is hard to deny that the Ewha crisis escalated because of the crisis of individual identity as an Ewha alum.

What’s more concerning is the frequency of unorganized organization’s action. Only two months ago, people mourned for the victim of the Gangnam Station murder. What is creating these phenomena? The Korean society may be missing the signals they are sending. That’s why I am worried and scared.


*The author is head of the digital team at the JoongAng Ilbo.