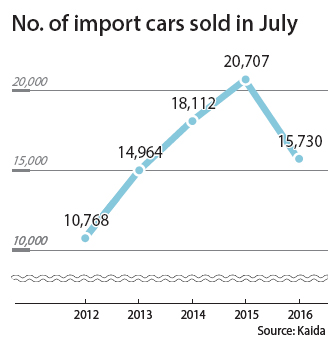 The number of import vehicles sold in July totaled 15,730, down 24 percent from the previous year, affected by an emissions rigging scandal and the end of a discount on the special consumption tax levied on new cars.

Compared to June, sales of foreign cars tumbled 32.8 percent, according to data released Thursday by the Korea Automobile Importers and Distributors Association (Kaida).

In June, the German carmaker was the fourth-best-selling brand after BMW, Mercedes-Benz and Audi.

Audi, also part of Volkswagen Group, saw its market share fall 46.5 percentage points to 9.56 percent in July, but it was still the country’s third-most popular brand.

“The import vehicle market in July shrank from the previous month, affected by the end of the 30 percent cut on the special consumption tax levied on new cars and reduced sales of a certain brand,” said Yoon Dae-sung, executive director of Kaida.

The Ministry of Environment on Tuesday revoked the certification of 83,000 vehicles encompassing 80 models in 32 variants sold by Audi Volkswagen Korea, accusing the company of falsifying emissions and noise test results. The move has effectively ended sales of these models in Korea.

In late June, prosecutors detained an Audi Volkswagen Korea executive for the company’s rigged emissions and noise tests, following lawsuits against Volkswagen Group in the United States that same month. The impact of these measures spilled over into July, and the repercussions still remain, especially with the ministry’s recent move to revoke certification.

The increased number of consumers who lost faith in eco-friendly diesel cars led to fewer vehicles of this type being sold in the first seven months of this year compared to the same period a year earlier. Their market share during the January-July period fell 5.2 percentage points year on year to 63.4 percent, while their gasoline counterparts saw a market share advance of 2.9 percentage points to 30.6 percent over the same period. The share of hybrids almost doubled to 6 percent, whereas the share of electric cars halved to 0.1 percent.