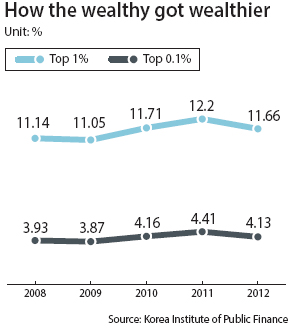 An employee of a small tech company in his early 40s say he has been trying to make ends meet even with the dual income that the family gets with his wife working.

“I don’t think we spend a lot but every month when the bills come in I feel as though I’m financially strapped,” said the man, who wished to remain anonymous.

“My wife earns more than I do but after spending on our daily necessities as well as our children’s educations, there’s not much left for us to save.”

The employee didn’t say how much he made in a year except that it was more than 50 million won ($44,844) but not close to 100 million won, which would place him in the top tier of individual earners.

“We don’t feel as though our economic situation has improved much since the global crisis,” he said.

A study by the Korea Institute of Public Finance on Thursday supports his theory. Data showed that the government’s Gini coefficient, or measurement of wealth equality, hasn’t reflected reality since the global economic crisis of 2008 and wealth distribution hasn’t improved much over the years. The top tier of earners still makes nearly 12 percent of the income among productive adults 20 and older.

“Although the economy struggles to recover from the global crisis and the income disparity that the public feels seems to be getting worse, it’s difficult to find such phenomenon on Statistics Korea’s Gini coefficient,” said Park Myung-ho, senior researcher at the institute. “For example the Gini coefficient based on disposable income for a household exceeding two people has been falling. This indicates that the income disparity may not properly reflect reality.”

Government data have shown the income gap has narrowed since 2008. The Gini coefficient is a number between 0 and 1, where 0 corresponds with perfect equality (where everyone has the same income) and 1 signals perfect inequality. Other than in 2011 when Korea’s figure rose slightly to 0.311 from the previous year’s 0.310, the metric fell to 0.295 last year.

However, the institute reports show that while the concentration of wealth in the top 1 percent has slightly dropped, the disparity remains high.

The statistics agency on Thursday said that the Korea Institute of Public Finance’s study on income class shows a disparity because it is based on individual income whereas the Gini coefficient is based on household income.