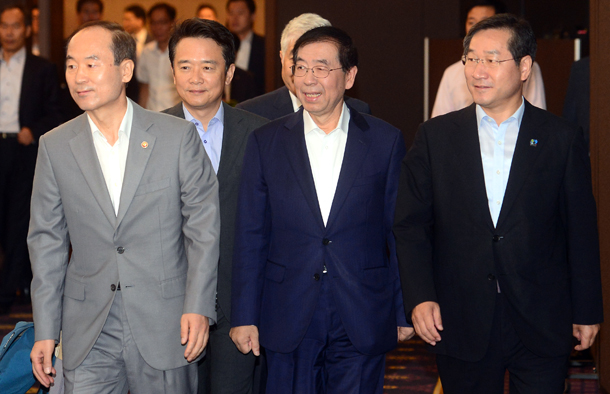 Seoul, Incheon and Gyeonggi will ban old diesel cars from operating in their respective regions starting as early as 2017 in an effort to reduce emissions of fine dust, the central government announced Thursday.

According to the Ministry of Environment, the Seoul Metropolitan Government will ban diesel vehicles registered before 2005 from operating in the city in the beginning of next year. The city of Incheon and 17 cities in the province of Gyeonggi will adopt the new rule in 2018.

There are 1.04 million vehicles registered before 2005 in these regions, according to the ministry. Among them, vehicles that have not passed annual inspections or failed to receive inspections will be banned from operating in the regions. The government said more than 40,000 diesel cars have failed such inspections each year.

“Diesel cars registered before 2005 do not have sensors that reduce fine-dust emission, and such vehicles discharge fine dust equivalent to the amount created by 8.1 diesel vehicles registered in 2015,” said Hong Dong-geun, a director at the Ministry of Environment. “We expect fine-dust emissions will be reduced by 28 percent, from 3,769 tons in 2016 to 1,071 tons in 2020, in the Seoul metropolitan area.”

The government said it will provide up to 6.44 million won ($5,780) for owners of old diesel vehicles to install sensors and fix engines to lower emissions. Owners will be able to operate their old cars once they install the sensors.

The government will fine owners that operate unchecked old vehicles 200,000 won each time they are caught, all the way up to 2 million won. On top of the fine, they will have to pay another 300,000 won for operating vehicles that are not inspected.

The Seoul Metropolitan Government said it will increase the number of surveillance cameras to catch such vehicles. Seoul will have 61 spots with cameras by 2019.