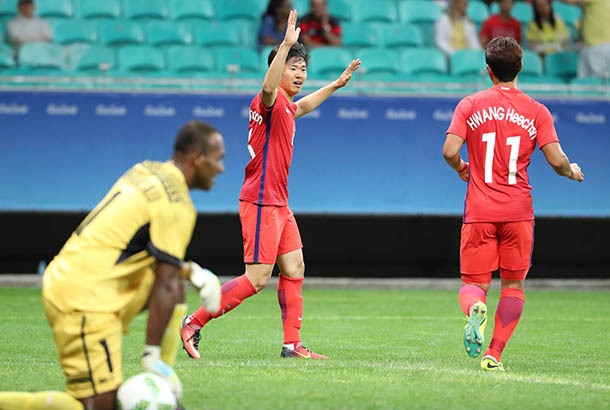 No team in the Olympics could have asked for a better start than Team Korea, whose football squad annihilated its Fiji counterpart 8-0 in its first preliminary match today in the 2016 Summer Games in Salvador, Brazil. Ryu Seung-woo quickly gained a reputation as the team’s next ace with a hat trick, while his teammate Kwon Chang-hoon and wild card Suk Hyun-jun each had two goals to lift Korea over Fiji. Son Heung-min, a wild card from Tottenham Hotspur, also scored one for Korea.

Korea had kept its momentum throughout the entire match against the South Pacific national team, dominating in ball possession and consistently penetrating into the opposing side. Korean young talents such as Ryu, Kwon and Moon Chang-jin led Korea’s offense, while team captain Jang Hyun-soo led the team from the midfield with meticulous passes and ball control. The Korean squad pressured their opponents especially with their passes from either flank.

As a matter of fact, it was from one of these side passes that Korea’s opening goal came in the 31st minute. After missing two perfect opportunities to score in the 30th minute of the match, Ryu trapped the pass from the right side with his chest and drilled in a diving shot off his left foot. Ryu’s shot left the Fiji goalie Simione Tamanisau dumbfounded and shook the left side of the net.

Wild card Son netted the fifth goal for Korea in the 26th minute off a spot kick. Suk extended the lead to 7-0 by nailing a shot off his left foot in the 32nd minute and again in the 89th minute. Ryu, whose plays throughout the match left spectators in awe, had his third and final goal of the match during the injury time.

With Son and Suk Hyun-jun stepping onto the pitch in the second half, all three wild cards of the team saw some playing time and were able to loosen up before the next match against Germany, which is slated for August 7.

Elsewhere in Group C, in which Korea and Fiji are competing, Germany and reigning gold medalist Mexico were tied 2-2, giving Korea an early lead in the group rankings.

By netting eight goals while conceding none to Fiji, Korea has boosted its chances to enter the quarterfinals. When two teams are tied in match records after the preliminary stage, the goal difference between the two teams determines who will move to the next stage. The top two teams from each group will then advance to the knockout stage.