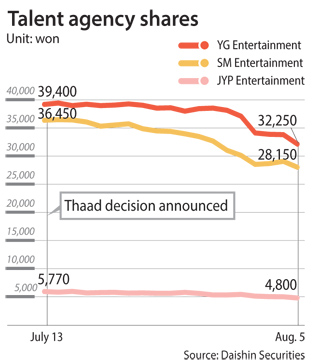 The growing fears over China apparently taking its revenge against Korea’s decision to deploy the Terminal High-Altitude Area Defense (Thaad) system have taken a toll on entertainment and cosmetics shares, industry sectors that are deeply tied to Chinese demand.

The Chinese government has not yet exercised explicit trade retaliation on Korea, but a series of abrupt cancellations of cultural and show business events indicate that the government may be targeting Korean companies. The uncertainties surrounding China’s possible action gripped Korea’s major entertainment companies, which enjoy a huge following in China thanks to the popularity of K-pop culture.

“The biggest threat in the stock markets is uncertainty,” said Kim Chang-kwean, an analyst specializing in game and entertainment sectors at Mirae Asset Daewoo.

“The market perceives that the Chinese government has weighed in,” Kim said, “and that creates uncertainty about the prospects of large Korean entertainment companies that have made huge profits in China.”

Shares of the three largest showbiz management companies - SM, YG and JYP - all plunged over the past few days.

YG Entertainment, the talent agency behind Big Bang and 2NE1, closed at 32,100 won ($29) on Friday, down 4.59 percent from the previous day. Shares of the company fell into a downward streak after the Park Geun-hye administration announced it had chosen Seongju County, North Gyeongsang, as the site for the Thaad system on July 13. YG shares were 39,150 won on July 12 but dipped toward the 38,000-won level by the end of July. The decline accelerated to 34,100 won by Aug.2.

Following the decision, Korea’s government and Trade Ministry said in July that there will be no economic revenge from China despite Chinese leadership’s disapproving comments.

Things turned more serious as one event after another scheduled to be held in China was called off with no clear explanation.

The Daegu Metropolitan Government and Qingdao city government agreed in March to an exchange program involving intercity participation in beer festivals in late July and in August. But the Daegu office said that its Chinese counterpart said it would not attend the event.

The entertainment sector saw a similar sequence of events. The lead characters of the drama “Unconditionally Fond” were scheduled to make a promotional visit in China, but it was announced earlier this month that the visit had been cancelled.

A total of 375.6 billion won has been wiped out in one month from the market cap of culture and entertainment shares, according to market tracker FnGuide on Friday.