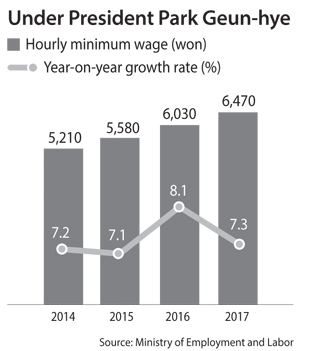 The government announced on Friday the newly raised hourly minimum wage for next year.

According to the Ministry of Employment and Labor, the government will raise the hourly minimum wage by 7.3 percent from 6,030 won ($5.43) this year to 6,470 won starting at the beginning of next year.

“We accepted formal objections starting from July 21 to Monday, and we didn’t receive any from the labor representatives,” said Kwon Chang-joon, a director at the ministry. “We did receive a petition from the Korean Federation of Micro Enterprise but decided that there is no need for further consideration after reviewing various laws and decision-making processes by the Minimum Wage Commission with labor and business sectors.”

In fact, the 7.3-percent increase is the second sharpest hike since last year, when the wage was raised 8.1 percent. The government said the new wage will impact 17.4 percent of all employees in the country, or 3.37 million people, and that this will help reduce the wage gap problem in the labor market here in Korea.

With the decision, individuals who work 8 hours a day on minimum wage will now receive 51,760 won a day and those who work 209 hours a month, or 40 hours per week with paid holidays, will be able to receive 1.35 million won. The monthly salary is 91,960 won more than what the same employee now receives every month.

Employers who fail to pay their workers in compliance with the new minimum level will face fines of up to 20 million won. Furthermore, the government plans to come up with new regulations and rules to fine business owners who repeatedly fail to comply with the new rule.

“We believe the minimum wage has gone up by a reasonable amount in this the slow economy,” said Chung Ji-won, a director general at the Labor Ministry. “We believe this will help solve the wage gap between those low income and high income earners here in Korea. The government will monitor closely whether local businesses follow the new minimum wage law and will cooperate with both public and private sectors to stabilize the labor market through various measures, including minimizing the decline in the number of available jobs for minimum wage workers.”

Government officials visited a total of 8,946 businesses and stores this year up until July. Their visits included large franchise stores and retail stores that are often accused of paying their employees low wages. The Employment Ministry said it will make another inspection of 11,000 such businesses later this year in order to encourage them to follow the new rule.

Meanwhile, the government also added that the 7-percent increase is higher compared to that of other developed countries.