On garlic farms, fewer hands for the harvest

On garlic farms, fewer hands for the harvest 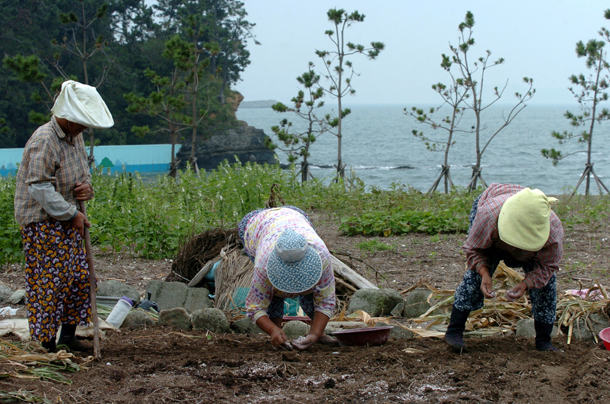 Farmers in Yeosu, South Jeolla, plant garlic in fields. Even though the price of garlic has doubled each year recently, farmers are reluctant to expand their size of farms due to the lack of manpower and high labor costs to hire workers. [YANG KWANG-SAM]

“I do care about money, but garlic cultivation just takes too much time and effort,” Kim said Thursday. “We need some 25 to 30 people a day during the harvest season and need to pay each of them about 70,000 won [$62] every day,” Kim added. “It is just is so hard to find enough workers every year.”

Kim’s farm is in Daejeong-eup, Seogwipo, on the southern island of Jeju. In Daejeong, farmers have produced some 25,000 tons of garlic this year, about 5,000 tons less compared to the previous year. Heavy rain during this year’s harvest season in May and June caused bacterial rot in the region.

Even though purchase prices for 1 kilogram of garlic rose from 2,500 won last year to 4,200 won this year, Kim won’t change his plan to further cut production.

“We soon need to sow seeds for next year’s harvest but it is not something that the two old men can do,” he said. “I am not sure if we can find new workers for the job this year.”

Some 1,700 Korean households grew garlic in the Daejeong region a decade ago, but that number has dropped to 1,200 today due to an aging population and a lack of manpower, said Moon Jae-hyun, a director at Noghyup’s Daejeong branch.

Song Bong-seop, 65, has cultivated garlic for more than 30 years at his farm in Muan, South Jeolla. He said that almost every household in his town grew garlic 10 years ago but all of the famers are now switching to onions, which are easier for aging workers to grow. Onions also are relatively cheap

There are just 86 households in Song’s town and only 25 households are growing garlic. That number, Song said, is declining yearly.

Ten kilograms of garlic were sold for 62,000 won at wholesale markets in Seoul on Wednesday, the Korea Agro-Fisheries & Food Trade Corporation (aT) said. That figure is 12.7 percent, or 7,000 won, higher than last year.

The average price of 10 kilograms of garlic in the past five years was 33,867 won, almost less than half this year’s prices.

According to government data, consumer prices increased the most in July 2015 for scallions, white radishes, onions, garlic and napa cabbage, in that order. Last month, prices for lettuce, young radishes, garlic, cucumbers and pumpkins rose the most. Garlic was the only vegetable whose price hikes were among the highest two years in a row.

When certain vegetables’ prices rise significantly for various reasons, including bad weather, the costs tend to decline in the following year as the government expands financial support for farmers who were affected. Also, farmers tend to expand their farmlands to add produce with rising prices to boost their profit.

Last year, the prices of onions soared but stabilized this year. The total farmland for onions in Korea rose 10.4 percent from 18,015 hectares last year to 19,891 hectares this year.

Garlic is the only product that is going against the supply and demand theory, in general. In the 1990s, land for garlic cultivation was near 46,000 hectares, but it dropped to about 20,000 hectares. Although the price of garlic jumped last year, the size of garlic farms rose only 0.6 percent year-on-year in 2016.

There are various reasons for this. Garlic cultivated in warm, southern regions in the country can’t use agricultural machines, which prevents it from growing well. Farmers and wholesalers shun machine-cultivated garlic.

Also, many regions in South Jeolla have lots of slopes and heavy soil, which make it hard for farmers to even use machines. In addition, 86 percent of garlic farms have areas less than 0.3 hectares and many of the farmers are aged.

“Garlic is considered as a vegetable that takes a lot of effort to grow and it also is hard to cultivate those using machines,” said Kwon Young-seok, a director at Rural Development Administration.

“There are fewer workers in rural towns in Korea in general and farmers are reluctant to expand the size of farming due to the high labor costs, even though the consumer price of garlic is soaring.”

Annual demand for locally grown garlic is an impressive 300,000 tons a year, as garlic is used in many Korean foods.

It’s difficult to increase the amount of garlic imports to stabilize prices in Korea.

To lower prices, the government announced that it plans to raise the ceiling on imports from 14,500 tons to 36,000 tons a year.

However, local garlic farmers are opposed to the plan.