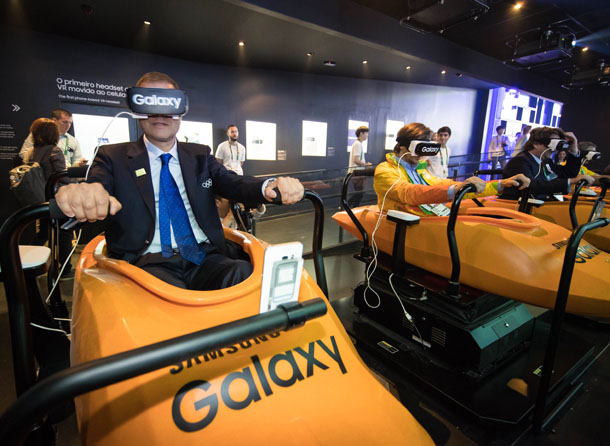 The leaders of Korea’s major conglomerates are busy as the summer Olympics in Brazil has kicked off, a perfect opportunity to raise their companies’ images while promoting brands before a global audience at the world’s largest sporting event.

The top executives are heading to Rio de Janeiro to strengthen their marketing as official sponsors and as the executives also head various sports associations.

Hyundai Motor Group heir and vice chairman Chung Eui-sun left for Brazil on Tuesday to encourage the Korean national archers as he’s also at the helm of the Korea Archery Association. His father, Chung Mong-koo, chairman of Hyundai Motor, previously held the position.

The automaker has invested 40 billion won ($36 million) to sponsor the Korea archery team, including paying to train young talent and purchasing equipment. The younger Chung has attended all major international archery competitions for years, including the 2008 Summer Olympics in Beijing. Chung was also at the 2012 London Olympics to hug the women’s national team when they won the gold medal.

Hanwha Group Chairman Kim Seung-youn also has a special connection to the Olympics. His 27- year-old son Kim Dong-seon is an equestrian who will be compete in Rio.

The athlete, who also works in the family conglomerate’s duty-free businesses, has been training amid a busy work schedule. His father is considering going to Brazil, as he’s also chairman of the Korea Shooting Federation.

Hyundai Development Company Chairman Chung Mong-gyu left for Rio on July 27, as he recently was re-elected for a second term as president of the Korea Football Association. Chung is also the head of the Korean athletic delegation for the Brazil Olympics.

SK Group Chairman Chey Tae-won has been a longtime supporter of the Korean women’s handball team and is chairman of the Korea Handball Federation. Last month, Chey visited the Korea National Training Center in northern Seoul, where he donated 100 million won to the national handball teams.

“Chairman Chey hasn’t decided whether to visit Rio for the Olympics,” said an SK official. “However, he has a strong will to cheer for the Korean team as he is the chairman of the handball federation.”

However, the chairman of Hanjin, parent company for Korea’s biggest airliner, will not travel to Brazil as he is working on restructuring his company’s shipping affiliate.

Samsung Electronics’ vice chairman Lee Jae-yong is staying put but the electronics company is an official Olympic sponsor. Samsung released a special Olympic edition of its Galaxy S7 Edge, which it gave to the 12,500 Olympians in Brazil. The company’s fashion affiliate has sponsored the business suits that the athletes will wear in Rio.