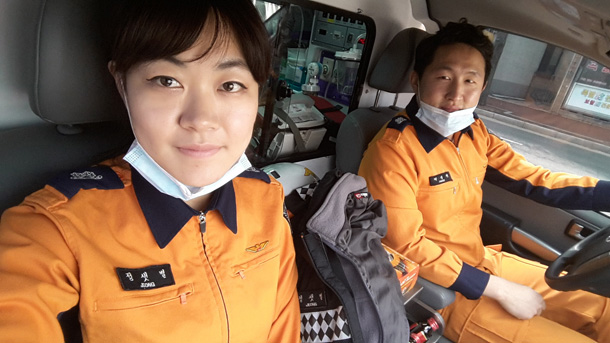 Chung Saet-byeol, left, and Park Sung-won pose in an ambulance together. The two firefighters met as colleagues in July of last year and were married in April. [CHUNG SAET-BYEOL]

Chung Saet-byeol, the wife, and Park Sung-won, her husband, work at Cheongju Seobu Fire Station in North Chungcheong. They received their awards at a ceremony held by the North Chungcheong government on Monday. Heart Saver awards are for firefighters, police officers and citizens who save patients’ lives in a variety of ways, including cardiopulmonary resuscitation.

Chung already has saved three carcinoma patients just this year. In Jan. 7, Chung saved a 60-year-old man who passed out in a church in Cheongju by performing cardiopulmonary resuscitation and using an automated external defibrillator. Just 10 days after, she saved another 30-year-old man at a church.

“I remember his 7-year-old son holding my arm and saying, ‘please save my father,’” Chung said in an interview with the JoongAng Ilbo. “I am doing my job every day, thinking there should be no person who dies without having time to say farewell to family members.”

Chung worked as a nurse at Korea University Hospital in Seoul for six years before she became a firefighter in January 2015. Chung said she was motivated by her brother, who also works as a firefighter.

Park also works at Cheongju Seobu Fire Station with his wife. He used the Heimlich maneuver to save a 70-year-old woman who had fallen unconscious after choking on a rice cake. Park started working as a firefighter in August 2010.

The couple first met as in July of last year and were married in April. Chung is 12 weeks pregnant right now.

They nicknamed the baby ‘Dodam,’ which literally means a well-raised child in Korean.

“I pray every time I go on a rescue mission,” said Chung, “and I tell my baby I am going to save someone, so don’t worry.”

Park said he did what he had to do and he is happy they all received awards.