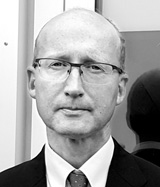 “As an honorary consul, I look forward to facilitating the exchange of ideas between the two countries, whether it be in business, education or culture,” Meinel told the Korea JoongAng Ilbo in a written interview on Monday.

Meinel was appointed by the Korean government as the first honorary consul to Greenland, an autonomous country within Denmark, in October.

He was then presented a letter of appointment in Nuuk, the capital of Greenland, on June 28 by Korean Ambassador to Denmark Ma Young-sam. Ma, as he presented the letter, asked Meinel to make efforts to promote relations between Korea and Greenland and to protect Korean nationals there.

The ceremony was also attended by Greenland’s Foreign Minister Vittus Qujaukitsoq, who called the appointment of Meinel as honorary consul as “a new turning point in relations between Korea and Greenland.”

“I had my first meetings with Korean officials last year,” said Meinel, recalling his first ties with Seoul, “and met with Ambassador Ma when he was in Nuuk opening the Korean Corner in the University of Greenland.”

At the Korean Corner in the University of Greenland that opened last year, students and staff can enjoy multimedia, music and books related to Korean culture, history and society.

The consulate has also screened Korean movies for locals, who especially like action films such as the 2014 cop thriller “A Hard Day.”

Meinel said that because of Greenland’s small population, it does not “have an actual Korean community” at the moment. The population of Greenland is just over 55,800 people, with 30 percent concentrated in the capital.

But, he added, “Greenland is seeing a steep increase in the numbers of tourists coming to the country. Lonely Planet rated Greenland a top 10 travel destination in 2016, and National Geographic also named Greenland in their list of best sites in 2016. We expect Greenland to become a very popular tourist destination over the next years.”

Meinel elaborated by saying there are many opportunities for infrastructure projects for potential Korean investors.

“A decision has been made to expand and develop infrastructure, including the airports in the major cities, which might be of interest to Korean companies,” he said. “The Greenland economy is primarily based on income from the fishing industry, but there is optimism regarding the development of small and large mining projects. The country has great potential with regard to its fresh water supply and hydropower plants.”

He added, “I look forward to visiting Korea soon and hope to make my first visit next year.”

Meinel, an attorney, coaches children’s soccer teams in his spare time. His wife is a pilot for Greenland Air.

“It is not that common for Korea to appoint an honorary consul,” said Ambassador Ma. “They are usually appointed in areas that an embassy or consulate cannot cover easily because of geographical constraints.”

Korea has only around 150 honorary consuls around the world.

Ma continued, “Greenland is seven to eight hours from Denmark and is also difficult to approach in the wintertime. It is also rich in mineral resources, so it is necessary to have an honorary consul.”

Korea imports from Greenland total $3.58 million, which includes marine produce, namely shrimp, according to the embassy, while it exports just $13,000 to the island. Greenland’s resources include gas and oil reserves and rare-earth elements.

In 2012, Korea and Greenland signed a memorandum of understanding on joint exploration for the development of mineral resources.

Most of the country is covered in an ice sheet over 3 kilometers (1.86 miles) deep, but receding icecaps caused by global warming are enabling more favorable conditions for mining and oil exploration.