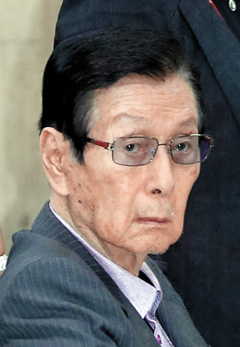 Prosecutors said they discovered key evidence that suggests Lotte Group founder Shin Kyuk-ho dodged 600 billion won ($540 million) worth of gift taxes while bequeathing some of his assets to his third wife and their daughter.

The businessman is alleged to have used at least four overseas shell companies for the transactions. They were set up by Lotte Group in 2005 in the United States, Hong Kong and Singapore.

Prosecutors confiscated documents from a local law firm that provided legal counseling for Shin during the transfer. Several Lotte insiders were also summoned for questioning.

Without mentioning a clear timeline, prosecutors said they would soon summon Shin’s third wife Seo Mi-kyung, 57, a common-law wife, and their daughter Shin Yu-mi, 33, an advisor to Lotte Hotel.

Authorities have yet to mention any plans to call in the Lotte founder for questioning.

In June, the Seoul Central District Prosecutors’ Office kicked off a massive investigation into the retail giant, dispatching some 200 investigators to raid Lotte headquarters, at least seven affiliated companies and executives’ residences.

The probe at Korea’s fifth-largest conglomerate is focused on the top executives’ creation of slush funds, embezzlement and corporate malpractices.

So far, the executive director of the Lotte Scholarship Foundation and eldest daughter of Lotte’s founder, 74-year-old Shin Young-ja, has been indicted on corporate malpractice and embezzlement charges, becoming the first member of the family to be formally accused by the state in the ongoing probe.

Authorities suspect Shin received bribes worth about 3 billion won from local companies in return for allowing them to open outlets in Lotte Duty Free and Lotte Department Store between February 2007 and May this year.

In return for allowing the major cosmetics brand Nature Republic open a store in a strategic location in Lotte Duty Free, Shin was said to have received three percent of the establishment’s sales in 2013 and 2014, which amounted to about 660 million won in total.

Shin also faces allegations of siphoning some 4 billion won from several other companies she helped manage, in part by putting her three daughters on the board of directors and having the companies pay them money through bank accounts that bore their names.

The financial transactions were disguised as their salaries, prosecutors said.

At Lotte Homeshopping, prosecutors suspect the TV channel bribed government officials when it was trying to renew its business license last year for another three years. CEO Kang Hyun-gu was summoned last month for questioning.

A professor on the judging panel formed to decide whether Lotte Homeshopping should have its license renewed and submit its recommendation to the Ministry of Science, ICT and Future Planning was said to have hidden the fact that he once worked as an advisor to Lotte.