Korea wins its first gold in Rio Olympics in archery

Korea wins its first gold in Rio Olympics in archery 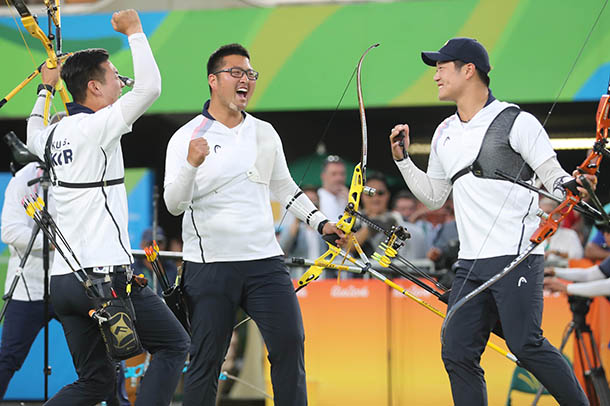 The Korean team composed of Kim Woo-jin, Ku Bon-chan and Lee Seung-yun didn’t lose a single set to the United States, including the perfect first set, and claimed the win with a set score of 6-0 (60-57, 58-57, 59-56) at the archery range at Sambodromo.

Kim, who didn’t make in onto the team for the 2012 London Olympics, said, “I tasted the bitterness of defeat four years ago. Continuous success made me complacent, I think. Such a tough process made me work harder.”

Team Korea is shooting for a podium sweep in archery at this year’s Olympics. While this was the fifth Olympic title for Korean men’s team, their female compatriots will be shooting for their eighth consecutive gold.

Korea’s gold in archery came while its other star athletes were falling out of the Games left and right in the first day. Veteran shooter Jin Jong-oh finished fifth in the men’s 10-meter pistol, an event in which he was going for a another gold as a reigning gold medalist from the last Olympics. In swimming, Park Tae-hwan was eliminated from the heats in his main event, the 400-meter freestyle, by finishing 10th.