Volleyball squad gets redemption in opener

Volleyball squad gets redemption in opener 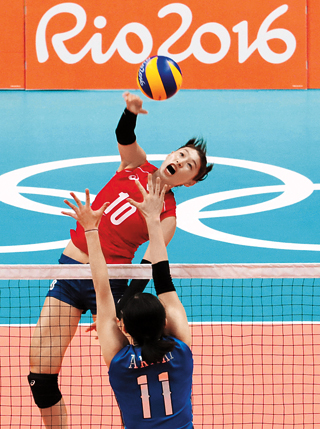 The Korean volleyball team overtook archrival Japan in the first preliminary round of the Olympics in Rio de Janeiro on Saturday, avenging a loss from four years ago when Japan won over Korea to take home bronze in the 2012 London Olympics.

The Korean team, ranked No. 9 this year according to the International Volleyball Federation (FIBA), is considered a volleyball powerhouse in Asia, frequently finishing near the top in various regional competitions during the past several years. Korea won gold during the 2014 Incheon Asian Games and silver in the 2015 Tianjin Asian Championship.

But the team has been in a medal drought when it comes to the Olympics, having gone without a single one since taking bronze during the 1976 Summer Games in Montreal. Korea came close to medaling in 2012 but ultimately lost to Japan in the bronze match 3-0 (25-22, 26-24, 25-21).

Kim, the highest-paid volleyball player in the world according to FIBA and the MVP from the 2012 London Olympics, grinded her teeth for the past four years and was ecstatic when she got news that the team’s first match in this year’s Games would be against Japan.

Despite her determination to take down Japan, Korea gave the first set during the preliminary match on Saturday at Maracanazinho in Rio by 19-25. The painful memories from four years ago started creeping back, but Kim continued to deliver her powerful hits, rendering many block attempts from the Japanese team useless.

“I shed tears then [during the 2012 London Olympics], and I am so happy to be able to smile today,” Kim told Yonhap News Agency. “London was really disappointing. I desperately wanted to win a medal there. And I’ve been preparing really hard for this year’s Olympics. I’d love to hang a medal around my neck.”

As the star and captain of the team, the 28-year-old outside hitter is considered the squad’s anchor, often coming to the rescue when the group is in a pinch. This was evident during the second set of Saturday’s match, when Kim scored with six kills. But even more so, she is the team’s motivating force, pushing her teammates and sometimes even yelling to set their focus on the game.

“We had a good start, but this is not over,” Kim said after the win against Japan. Korea will next take on Russia, ranked No. 4 in the world, for its next preliminary match on Monday in Rio.