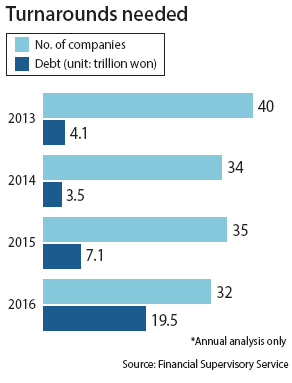 Thirty-two big companies will have to go through restructuring this year, the nation’s financial watchdog said Sunday, and will face tighter monitoring by their creditors.

According to the Financial Supervisory Service (FSS) on Sunday, the total number of companies requiring drastic turnarounds has dropped by three compared to the previous year, but the total assets involved rose 130.2 percent and the debt increased 174.6 percent. Troubled businesses’ total assets stood at 24.4 trillion won ($21.9 billion), and their debt was a cumulative 19.5 trillion won this year.

The rise in debt and assets comes from big shipping companies such as Hanjin Shipping and Hyundai Merchant Marine being included on the list.

“Companies related to shipping, shipbuilding and construction, which have been very weak recently, accounted for 53 percent of the 32 companies on the list,” said Chang Bong-seop, head of the credit supervision department at the FSS.

The FSS analyzed 602 out of 1,973 companies with debt exceeding 50 billion won and graded them based on a scale of A to D. The financial watchdog chose the 602 companies based on their financial condition, and one factor was whether their annual sales decreased by 20 percent for two consecutive years.

A-grade and B-grade assessments meant the companies were running their businesses normally and not facing crises.

A total of 32 companies received C and D grades. Companies that received C grades will have to follow creditor-led debt workout programs. D-graded companies will go into court receivership.

“Among the new companies on the restructuring list, there were a total of six each from the shipbuilding and construction industries this year,” Chang said.

The FSS said that conditions for the construction sector in particular have improved compared to last year.

“Construction companies went through restructuring since they were hit hard by the financial crisis in 2008,” Chang said. “The number of contracts that local construction firms won this year rose by some 40 percent compared to the previous year.”

The FSS noted that more electronics companies are becoming financially weak compared to the past.

“For two years in a row, more than five companies in the electronics industry have been selected to go into restructuring,” Chang said. “All five of them are electronic components enterprises, and we will monitor them closely.”

The FSS added that 26 companies with A or B grades did not receive poorer grades because their management teams have come up with their own turnaround plans.

DSME received a B grade in assessments this year and last. The shipbuilder belatedly announced earlier this year that its debt-to-capital ratio exceeded 7,308 percent last year. The FSS released its list last December.

The company’s former CEO has been indicted for accounting fraud and is being questioned by prosecutors.