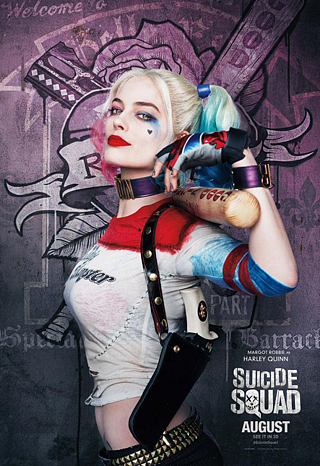 LOS ANGELES - Margot Robbie’s Harley Quinn was the breakout star of “Suicide Squad” before the movie was even finished. Audiences were captivated by this insane villain with the high-wattage smile, baseball bat, fishnets, pigtails and a T-shirt that read “Daddy’s Lil Monster.”

But now that the film is out in theaters and being savaged by critics, that tide may be turning. Harley Quinn has become a divisive figure. To some, she’s still the breakout. To others, she’s the unwitting victim of a misogynistic story and an abusive relationship.

In the film, she’s the kind of character who cackles gleefully after surviving a harrowing helicopter crash, and coyly asks “What?!” after changing into some skintight hot pants in front of dozens of men. She’s also obsessively devoted to her boyfriend, the Joker (Jared Leto), who is also the one responsible for her transformation from accomplished psychotherapist to all out psychopath.

“It is a very difficult role,” said director David Ayer. “You want to talk about a really, difficult, complex performance? Margot delivers.”

Early on he got a tip from Warner Bros. that he should look at the rising Australian actress for the part. Ayer liked Robbie’s ability to disappear into her roles and cast her in the film.

In bringing the relationship to the screen, everyone was keenly aware of the potentially problematic nature of this unhinged couple. They had to strike a delicate balance. Even Robbie has acknowledged her initial confusion about Harley’s complete devotion to a man who treats her poorly.

“We wanted to make sure that she wasn’t victimized and didn’t come off being victimized,” said producer Charles Roven.

Thus, they sought to make her the driver of her own actions. Producers also said they tried to make sure the Joker is as obsessed with her as she is with him.

Still, many critics, like Buzzfeed’s Alison Willmore , MTV’s Amy Nicholson and The Daily Beast’s Jen Yamato , are dismayed that the relationship and the complex figure of Harley Quinn is not investigated further.