Tegan and Sara mature, with a little help from Neil Young

Tegan and Sara mature, with a little help from Neil Young 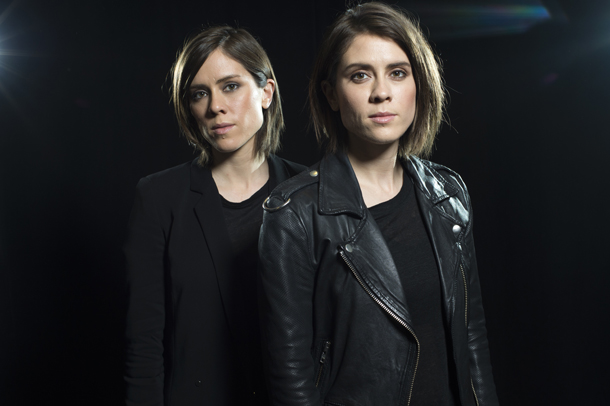 In this May 12, 2016 photo, Sara Quin, left, and Tegan Quin, of the Canadian singing duo Tegan and Sara, pose for a portrait in New York. The sisters released their eighth album, “Love You to Death,” in June and will launch an international tour this fall. [AP/NEWSIS]

NEW YORK ­- Tegan and Sara remember the unfiltered advice Neil Young and his manager gave them when they were signed to the rock icon’s Vapor Records 16 years ago as budding 19-year-old singers.

“There was a very poignant speech about ‘You could go this way and you’re taking a real risk if you don’t have success, there’s a chance a major label won’t be interested in you for very long, but then there’s this path and this path is harder, there’s less money and you’re going to struggle but it’s going to give you time to develop as an artist.’ And that’s, quite literally, the best gift you can be given as a young artist is time to develop,’’ Tegan, now 35, recalled in a recent interview with her sister.

“We really in a huge way owe our incredibly long career to Neil Young and his manager, Elliot Roberts, because they afforded us that time.’’

After self-releasing their 1999 debut, the twin sister duo, who are advocates for the LGBT community, released their 2000 sophomore album and other efforts on Young’s label until 2007. Now, Tegan and Sara have released their eighth album, taking on a fresh sound and playing the field like new artists with veteran experience.

The sound on “Love You to Death,’’ which reached the Top 20 on the Billboard 200 albums chart in June, extends the ‘80s pop sound they introduced on 2013’s “Heartthrob,’’ leaving behind their alternative rock style behind.

“We’ve been sort of in the indie-rock community for a long time and we’ve done really well there ... but I think there was still something lacking for us. We felt that we were still sort of kind of limited and I think probably a lot of that was that guitar is not our primary instrument, piano was,’’ Tegan said. “Pop continues to be very interesting. It’s actually kind of hard to write a pop song ... and we love the challenge of that.’’

“Love You to Death’’ is a bold, upbeat adventure with topics ranging from stalking ex-lovers to family drama. The album was produced by Greg Kurstin, who worked on the Canadian duo’s last album and also produced hits like Adele’s “Hello’’ and Sia’s “Chandelier.’’

“You’re not going to hear Sia and not know it’s Sia. He’s going to work with Adele, you always know it’s Adele. These are people who have a really established character and sound and voice, and I feel honored that in a way by working with Greg we get to be that voice, too. He’s not changing it or distorting it (in) some kind of way that people don’t recognize it’s us. I think that was sort of what allowed us to feel confident with changing the sound a bit and going in a more pop production,’’ Sara said.

They’ll bring the new songs to life with a U.S. and Canadian tour kicking off Sept. 9 and running through Nov. 16. They will visit New York City, Nashville, Tennessee, and even their hometown of Calgary, Alberta.

Tegan and Sara say they’re also excited to see fellow Canadians such as Drake, Justin Bieber and The Weeknd dominate the pop charts in America and around the world.

“In Canada there’s a lot of government grants and a lot of money that comes from taxes that actually gives funding to artists like us to make music videos, travel internationally, fund small business projects, and what’s amazing about Canadian talent doing so well internationally is it reinvigorates those funds. It makes people go, ‘Yes, we need to continue to fund small acts, develop young bands,’ so it is win-win,’’ Tegan said. “Drake and Bieber and Weeknd absolutely have a hand in helping to support the arts in Canada just by default by being successful.’’