A tale of two candidates

A tale of two candidates 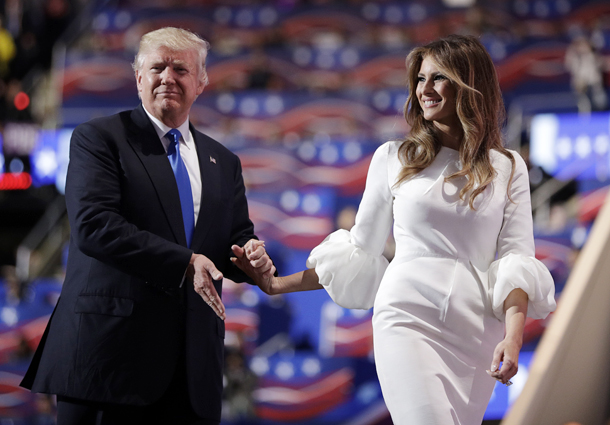 At the Republican National Convention in Cleveland on July 18, Donald Trump appeared on stage to Queen’s “We Are the Champions.” I was on the second floor of the arena, and an elderly lady who had been sitting quietly next me stood up and started yelling. By the end of the convention, her voice was hoarse from shouting. Trump appeared in the blindingly bright white spotlight, and thousands of supporters rose to their feet and cheered. It was like a religious congregation. A few days later, The New York Times described Trump as “presenting himself as the savior needed for a doomed nation.”

In the acceptance speech, he said, “I alone can fix it.” In contrast, Hillary Clinton said, “We’ll fix it together.” The conventions of the two parties went just as the two candidates claimed.

In the Democratic National Convention, primary rival Bernie Sanders and first lady Michelle Obama declared they were with Hillary Clinton.

From the incumbent president and vice president to people representing minority, Muslim and gay populations, they all showed support for Clinton.

But Trump was on his own. At the Republican National Convention, political rival Ted Cruz urged people to “vote your conscience” and practically opposed Trump’s candidacy. House Speaker Paul Ryan focused on criticizing Clinton without showing support for Trump. John Kasich, the governor of Ohio, the state where the convention was held, did not attend.

The U.S. presidential election seems like a done deal. Trump’s ratings should have fallen long ago. The Democratic Party and progressives have formed a united front comprising Obama, Sanders and Elizabeth Warren.

In contrast, the conservatives are divided. The Bush family and Mitt Romney have broken away, and the party leadership under Ryan and senior members led by John McCain are fighting against Trump. Major media outlets such as The Washington Post, New York Times and CNN for months have been promoting the message that Trump’s victory means America’s fall.

Nevertheless, there is another front not highlighted by the mainstream media. Trump is an outsider and differentiates himself from the Washington establishment. What he represents may be a politics of division and anger, but he is certainly different.

Clinton, on the other hand, is a familiar name. Twenty-three years ago, she entered the White House as the first lady. Americans raved over a Clinton once already. Can they find Hillary Clinton fresh and new after 23 years? Will those who went wild for Obama once again go wild for Clinton?

While the latest polls show Clinton leading by double digits, it is not because Clinton took the lead on issues or garnered more passionate supporters. She benefitted from Trump’s self-destructive behavior.

But the backlash on Trump’s behavior does not guarantee an election victory for Clinton. The presidential election is not over yet.


*The author is a Washington correspondent for the JoongAng Ilbo.