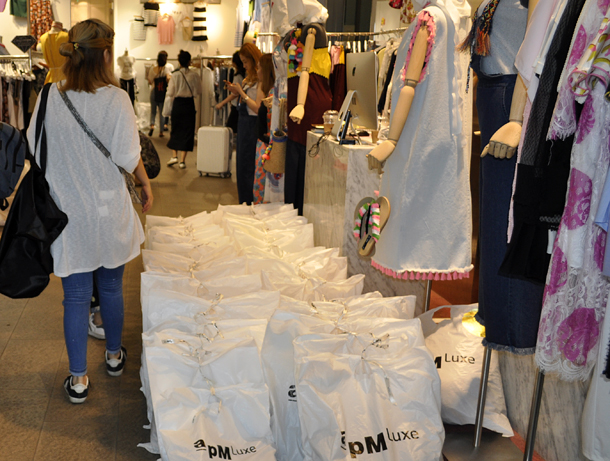 Customers browse products in a wholesale shopping center in Dongdaemun, central Seoul early Friday morning, as packages of clothing samples are piled on the floor. Most of these buyers are Chinese wholesale dealers who copy the styles to be resold in China. [LEE SO-AH]

On any given day in the fashion district of Dongdaemun in central Seoul, droves of Chinese tourists flock to shops selling local clothing designs, a result of the so-called Korean Wave of popular culture in China. Television shows and movies have led fans to seek styles similar to those worn on-screen.

But not all retailers welcome the wave of tourists because garment buyers are among the crowds sweeping up samples to be copied and sold back in China.

“I come to Dongdaemun every two weeks, and copy the styles to sell in both offline and online markets back in my country,” a Chinese wholesaler said on the condition of anonymity. “Customers just love the fashion styles that we copy from Korean online shopping malls.”

Alvin Liu, general manager of Alibaba-owned online business-to-consumer retailer Tmall Global, said on Tuesday that there are currently some 600 Korean fashion brands listed on Tmall’s Korea Pavilion service, with estimated yearly growth of 50 percent to 50 percent. He predicts the fashion business will be the next hit following the worldwide success of Korean cosmetics. 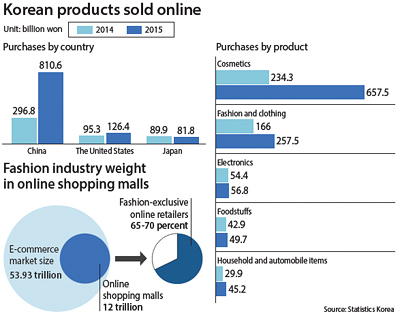 Most small to midsize fashion outlets targeting foreigners are stationed in the Dongdaemun area. There are as many as 35,000 clothing stores housed in some 30 shopping centers, making the district a hub for Korean fashion.

Some 75 percent of Dongdaemun’s wholesale products are exported, and most of the customers are Chinese.

“More than 90 percent of our customers are Chinese, and they appear as soon as new products are put on display every Sunday,” said Kim Ok-kyeong, owner of a small fashion brand in Dongdaemun. “Each shop in Dongdaemun has a distinct style of clothing design, so customers choose the one that best suits their needs. During peak seasons, we receive orders for 500 to 600 pieces.”

“In the past, the Chinese used to look for vibrant colors like red and yellow, but nowadays, they have learned to benchmark Korean style,” storeowner Park Jeong-hoon said. “Our shop, for example, releases five new products every week, and this is like a gold mine for Chinese buyers.”

According to an industry insider, the amount of new products that pour into Dongdaemun on an average day is between 20,000 and 30,000 pieces. More than 10,000 designers work with 150,000 workers in the fashion wholesale complex as well as 20,000 factories to plan, produce and distribute new clothes.

The whole cycle is completed in two to three days, faster than multinational fast-fashion brands such as ZARA, Uniqlo and H&M that release new items roughly every two weeks.

The street fashion produced by these clothing designers has led to a slew of Chinese wholesalers copying styles, albeit with lower quality and design flaws.

Fashion retailers say that for Dongdaemun to combat this problem and grab a greater piece of the export pie, Korean designers and brands should enter the Chinese market directly, as is the case with online fashion malls.

According to Cafe24, the nation’s No. 1 e-commerce platform provider, about one million online shopping malls have been created through its service since 2003, and 70 to 80 percent of them belong to the fashion industry.

Many have been successful. Stylenanda, a domestic online fashion retailer that entered the Chinese market in 2010, recorded 100 billion won ($90 million) in sales last year.

K-fashion is expected to continue expanding. Statistics Korea data from last year showed that 68 percent of direct online sales totaling 1.19 trillion won were made from Chinese consumers. Cosmetics was dominant, occupying 657.6 billion won of sales, but fashion and clothing also saw a 55 percent boost year on year to 257.5 billion won.

Online sales of clothing in China last year amounted to 2 trillion won, and the figure will surge up to 9-10 trillion won by 2018.

Chinese retailers also agree that selling “original” products is better for more long-term revenue. Qi Chen, CEO of China’s largest online fashion mall Mogujie, plans to visit Korea in August to scout out popular Korean retailers that can offer their services in China through his company. More than 10 million users log on to Mogujie every day, and the company’s total revenue last year was around 2 trillion won.

“Actually, Chinese consumers don’t really pay attention to Korea’s fashion brands, but instead the myriad of street fashion styles created in Dongdaemun,” said Lee Jae-suk, CEO of Cafe24. “So these individual entrepreneurs’ online shopping malls are not only a distribution channel but also a creative activity.”

Korea Fashion Association’s Kim Sung-chan said, “A maximized synergy will be created if the distribution network of the Chinese market unites with Korea’s product quality and design capability.” He added that online shopping malls, offline design modification shops and business-to-business fashion exhibition are the three such channels that possess profit potential.