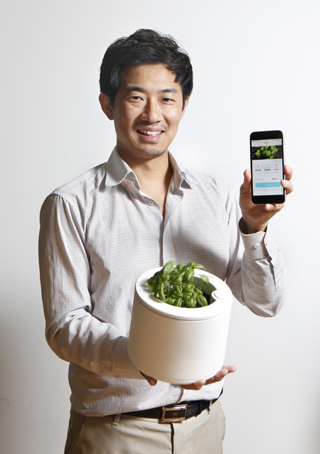 For most viewers, the movie “Martian” was just a science fiction flick starring Matt Damon, but to some it was an inspiration that they could build a farm for living on Mars.

“It might seem extreme, but if people will head for Mars, they’ll need a farm there,” says Kim Hye-yeon, or Leo Kim, founder and CEO of N.Thing, an Internet of Things (IoT) start-up. “We want to introduce a smart way for everybody to become farmers almost anywhere.”

Mars is included in the start-up’s faraway plans, but it started with a smart pot that enables people without green thumbs to get into gardening.

N.Thing - which means connecting a “number” of things to make “new” things - developed a smart pot named Planty combining IoT and farming. The rare combination, especially in Korea, immediately caught the eyes of many domestic investors who wanted to grant the start-up a chance to upgrade its businesses.

Planty enables users to monitor plants through smartphone apps and adjust their environments to stimulate growth.

The company’s initial win was in 2013, at a Global K-start-up program hosted by Google and the Ministry of Science, ICT and Future Planning. N.Thing placed second among 428 teams and earned 40 million won ($36,000), half of which was used for seed money.

In January 2014, the start-up officially became a corporation and was selected by SparkLabs, one of the nation’s most prominent accelerators, for incubation.

TriBeluga, Intops, Korea Development Bank and Chinese Empower Investment followed with investments in the IoT farming start-up. Total investments have hit nearly 3 billion won, though the company has yet to receive it all due to milestone agreements.

Global crowdfunding site Kickstarter was a big boost for the start-up on the global market, as its funding round in April 2015 resulted in sales of 650 pots bringing in more than $103,000, successfully accomplishing its pledge.

“There hasn’t been much innovation in smart farming by Korean start-ups but the [N.Thing] team presented good ideas by applying big data and IoT service to farming,” said Hanjoo John Lee, co-founder and general partner of SparkLabs. “Since agriculture is a fundamental part of human life and people start finding interest in urban agriculture, I think the business has great potential.”

The idea of smart farming came from CEO Kim’s experience in both IT and agriculture. He studied electronics and communications engineering at Hanyang University until he left school to work in his uncle’s farming equipment company, Myungsung Placon, in 2010.

“I always wanted to start my own business, but my uncle recommended I should first build work experience and so I began working at his company, which was related to the farming business,” Kim, 30, said. The work granted him a chance to build and operate a tomato farm in Uzbekistan.

His first harvest at the tomato farm was a big success, but the second was a huge failure.

“For the first year, we brought an experienced Korean farmer with us to check on the farm in Uzbekistan, but in the second round of harvest he declined to come so we were on our own,” Kim said.

After the second harvest, Kim thought he needed to connect the expert’s know-how to actual workers in Uzbekistan to help harvest better tomatoes.

“If the farmer could monitor the farm through the internet and give advice there’s no need for him to be on the spot and that way the farms could work in any place.”

After leaving his uncle’s company in 2011, he worked at Korea Electronics Technology Institute for about a year, where he researched IoT platforms and service development.

“I was lucky to research IoT at the time, because then nobody really knew what it meant,” Kim said. “It wasn’t until 2014 when Google acquired Nest at 3 trillion won that people began to question what IoT is.” Nest is one of the most recognized start-ups in the IoT sector and manufactures thermostats that control home temperature via internet connection.

Kim was able to become an early mover in Korea both in the IoT and farming sectors. 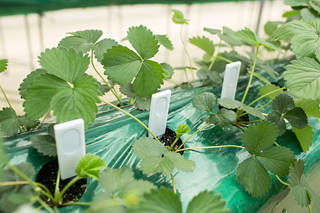 N.Thing developed Planto, three smart sensors that are placed in the soil of the start-up’s strawberry farm in Siheung, Gyeonggi. The sensors measure moisture, temperature and intensity of light on the farm to help farmers monitor their crops.[N.THING]

The initial focus of his start-up was innovating urban agriculture by adding smart technology, but it was too big of a project to start with. It required too much funding and resources. So he thought of a more familiar and simpler product that he could start with right away, and that was the pot.

“Everybody has experience of growing a plant at home and killing it,” Kim said.

Planty allows users to monitor the temperature, moisture in the soil and the amount of light around the pot through the app so growers can adjust the environment to the best condition for growth.

Planty will be able to communicate with other smart home devices like the Nest thermostat and Philips smart bulb, but for now users have to adjust conditions around the plant when notified. The pot, however, is capable of watering the plant with water saved in its tank.

As the plant grows, the app records and backs up environmental data, which users can share with other subscribers. The data collected also becomes a database for the start-up to provide quality information on growing various types of plants to its customers.

Initial delivery of the product to those who ordered the pot through Kickstarter was completed in April and the start-up is now in mass production for sales on the market to begin this month.

The company also plans a follow-up product, Planto, a sensor that users can insert into the soil of pots or gardens to measure the condition of the soil. It’s a spin-off from the pot product, with only the sensor function installed for easy use.

“The sensor will be offered at a cheaper price so a wider range of people can experience [our product],’’ Kim said. “Also, the sensor will help us collect more information on how plants grow and are managed.”

To test the effectiveness of its sensor, the start-up acquired roughly 1,650 square meters (0.41 acres) of land in Siheung, Gyeonggi in June, and is growing strawberries. The start-up rarely visits the farm but manages the farm by coaching workers on site by monitoring strawberries through Planto. About 4 to 5 tons of strawberries will be harvested this month for sale. 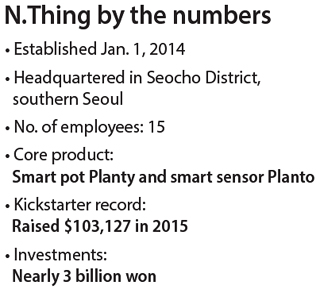 The start-up also has a gardening journal app called Life, which users can keep daily records on plant growing and share it with others.

App users have to record data, such as photos, memos and data on their plants. The app is still in beta test mode and has only about 20,000 subscribers so far.

“Once, a user from Ukraine e-mailed us saying this was exactly the app she was looking for,” the CEO said. “Since the app was only serviced in Korean and English she offered translation into Russian and that’s how we were able to service Russian on our language list.”

N.Thing is preparing for services in more languages to cater to the needs of overseas customers as the product has been more popular abroad than in local markets. “I think almost all of our customers are from overseas,” Kim said.

Smart gardening or farming is a relatively new concept, especially in Korea. That’s why the start-up is looking to enter foreign markets, including Mars.

“At first our focus was on American and European markets since they already have a mature gardening culture,” he said. “But after a consulting with a CEO of a company in the gardening industry, we began to see more chances in the Asian market where gardening culture is not yet prevalent.”

The start-up has been targeting Japan since the latter half of last year. It has recently completed a crowdfunding round in Japan with aims to expand its presence there. Also in June, it attracted a $500,000 investment from Empower Investment, a Chinese investment company with portfolios centered on internet and mobile devices.

These are all part of Kim’s strategies to create a smart gardening trend in Asian markets.

The start-up still has a long way to go, though, as its mass production is not yet finished. “We’ve come a long way with our business but still, we think of every day as a possible crisis,” Kim said. The company initially will sell through its own online store then expand distribution channels so the product is more accessible.