“Dream Journey to the Peach Blossom Land” (1447), by An Gyeon, is one of seven important Korean paintings that are kept overseas but recreated at Dongdaemun Design Plaza in central Seoul.[SEOUL DESIGN FOUNDATION]

Korea has been shaped in many ways by Japanese colonization (1910-45) and the Korean War (1950-53), but one often overlooked consequence was the loss of the nation’s prized artwork and historical objects.

Many were stolen and smuggled out of Korea during the periods of control or chaos, and only in recent years has the government worked to catalogue and repatriate the more than 160,000 pieces currently overseas.

But repatriation isn’t always easy, and a new exhibition at the Dongdaemun Design Plaza in central Seoul suggests there may be an alternative way for Korean artwork held overseas to be enjoyed at home.

“Digital Guihyang” recreates seven of these precious paintings and drawings in digital form. (Guihyang literally translates as “back home.”) The pieces have been animated and include music to better illustrate the stories within them.

In the case of the painting “Dream Journey to the Peach Blossom Land” (1447) by the Korean master An Gyeon, the phenomenal scenery unfolds from the left, and once the digital canvas is completely filled with the painting, butterflies flit around. Considered one of the best examples of Korean landscape painting, it is currently kept at Tenri Central Library in Japan. Although An was one of the most renowned painters of the Joseon Dynasty (1392-1910), this is believed to be his only remaining work. 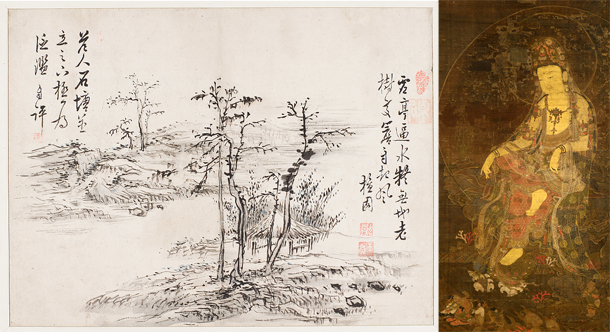 One of the most striking is a painting of the “Water-moon Avalokiteshvara” from the first half of the 14th century. The scene itself, which was interpreted by many painters, was among the most beautiful to come out of the Goryeo Dynasty (918-1392), and some have said it’s the most striking in all of Buddhist art.

It features the bodhisattva, believed to help prevent calamities and disease, and paintings of the scene are characterized by the figure’s translucent robe, which flows in a way that makes it seem almost real.

Roughly 40 paintings of the scene are known to still exist, but only around four are here in Korea. The one being recreated at the exhibition is currently kept at the Metropolitan Museum of Art in New York, and the digital version features a robe that actually flows.

Another animated work is the painting, “Portrait of Scholar-Official Yun Bonggu (1681-1767) in his Seventieth Year” (1750) by Byeon Sang-byeok, which features Yun blinking his eyes. The painting is kept at the Los Angeles County Museum of Art (LACMA).

Other artworks include digital recreations of “Landscape” drawn by Kim Hong-do between the late 18th to early 19th century; “Screen of Banquets for Dowager Queen Sinjeong in Gyeongbokgung Palace Eight-panel Folding Screen” (1868) by an unidentified artist; and “Seokpa Pavilion” (1860) by Yi Han-chul - all parts of LACMA’s collection.

The exhibition was funded by a campaign that raises money to repatriate Korean art. It was first held at the Korea University Museum and Minoo Media Art Museum in February. The organizers hope that with more donations, more digital pieces can be created and housed in a permanent venue.

The exhibition runs until Aug. 31. Hours are between 10 a.m. and 6 p.m. Admission is free. More information can be found on the DDP’s website, www.ddp.or.kr.