A weightlifting bronze, followed by a stunning judo upset

A weightlifting bronze, followed by a stunning judo upset 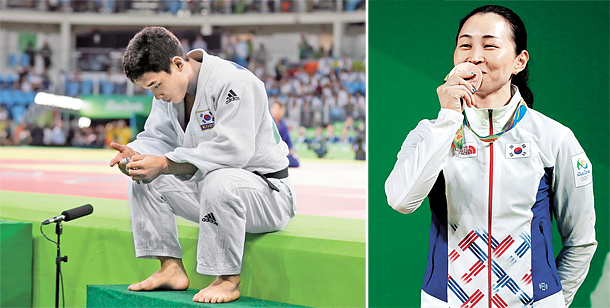 Korean judoka An Ba-ul, left, drops his head after finishing second to claim silver in the men’s 66-kilogram judo competition. Earlier in the day, Yoon Jin-hee, right, claimed a bronze in the women’s weightlifting competition. [AP/NEWSIS]

Korea’s An Ba-ul, the No. 1 judoka in the world in the 66-kilogram (145.5-pound) category, had to settle for silver after he was defeated by Italy’s Fabio Basile on Sunday at Carioca Arena 2 in Rio de Janeiro, Brazil. Earlier during the day, Yoon Jin-hee, a Korean weightlifter who competes in the women’s 53-kilogram category, captured bronze after coming out her retirement after the 2008 Beijing Olympics.

An, a Korean judoka who was considered a sure bet for gold, was determined to tally the first gold medal in judo for Korea on Sunday. As the top seed, no one doubted An would stand at the top of the podium by the end of the day, and his journey to the finals was as dramatic as any, as it involved taking down his old nemesis Masashi Ebinuma of Japan in the semifinals, his first win over the Japanese judoka in three meets.

The 22-year-old judoka then met with Italy’s Basile in the finals. Basile, who is ranked No. 26 in the world, was deemed to be easy prey for An as he set his foot towards gold. But the Korean World champion’s hopes came crumbling down just 80 seconds into the match when the Italian tossed him for an ippon to claim the win.

An seemed dumbfounded, unable to gather his sense while his opponent scurried around the mat to celebrate his win. An stood at the corner of the arena, utterly speechless, until Basile came to console him.

“I lost my focus from relief after I had just defeated my archrival,” said An after the match. “This made me lower my guard during the finals.”

An admitted that he went into the gold medal match with pain all over his body, including the heel injury from the semifinals, but added that this was no excuse. “I hurt my left shoulder about three weeks ago so I was unable to execute some moves as well as I wanted to. The heel injury also bothered me.”

But there is a silver lining. For An, the loss will be the motivation to push himself harder for the next Olympics. “I will push myself forward to the Tokyo Olympics,” he said.

Another medal came in the weightlifting event, during which Yoon, a silver medalist from the 2008 Beijing Olympics, clinched bronze in the women’s 53-kilogram event by snatching 88 kilograms (194 pounds) and jerking 111 kilograms to lift 199 kilograms total.

The 30-year-old weightlifter declared retirement in 2012 before the London Games, looking to live a new life as a wife and a mother. What compelled her to come out of retirement was her husband Won Jeong-sik, a weightlifter and teammate from the national team.

During the 2014 Incheon Asian Games, Won suffered from an injury during competition and had to go through rehab. Won then suggested that Yoon return to the sport and they compete alongside each other. Yoon started training again and became a source of strength, as well as training partner, for Won.

Eventually, Yoon and Won made their way to the Rio Olympics together. Now that Yoon has a medal around her neck, it is Won’s turn to take up a medal and express his gratitude to his wife, who kept by his side all through the past several years. Won will be participating in the men’s 69-kilogram category on Aug. 10, Korean time.