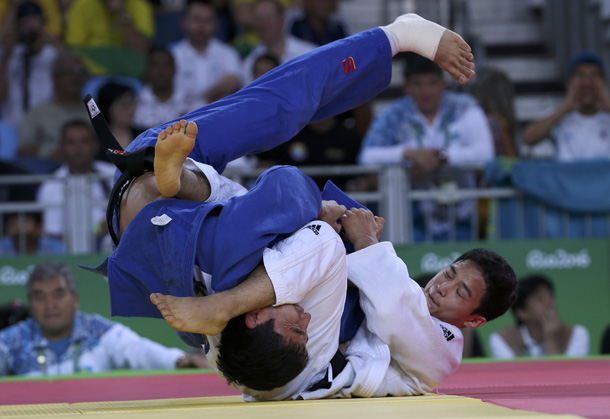 An Ba-ul, right, during a judo match on Sunday in Rio de Janeiro, Brazil. Ranked No. 1 in men's 66-kilogram, An claimed silver from the Games.[XINHUA/NEWSIS]

Korea’s An Ba-ul, who is ranked No. 1 in the world in the 66-kilogram (145.5-pound) category, had to settle with silver after he was defeated by Italy’s Fabio Basile on Sunday at Carioca Arena 2 in Rio de Janeiro, Brazil.

An challenged the Italian from the get-go, trying to take him down with a shoulder throw just 15 seconds into the bout. But he eventually lost to Basile, who is ranked 26th in the world, by an Nippon 70 seconds later.

As of Monday, Korea time, Korea has claimed two silvers in judo, a result that is quite disappointing for some as Korea was expected to tally gold early on in the Games.