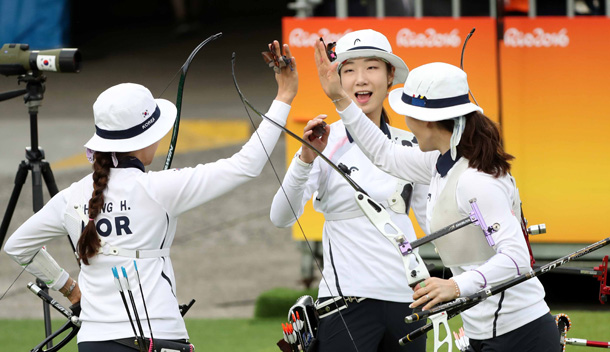 Korean female archers celebrate during the team event on Sunday in Rio de Janeiro, Brazil. The trio topped Russia in the finals to claim gold.[NEWSIS]

Korea’s dominance in archery has been proven once again as its women’s archery team claimed gold in the archery range at Sambodromo in Rio de Janeiro, Brazil, on Sunday.

Taking the top spot on the podium once more, Korean women’s team has swept gold from 1988, when the sport became an official medal event, to 2016.

Sunday’s victory came just a day after the Korean men’s team accomplished the same feat, and with two golds already under its belt, Team Korea is already on its way to dominating the podium in archery at this year’s Olympics.