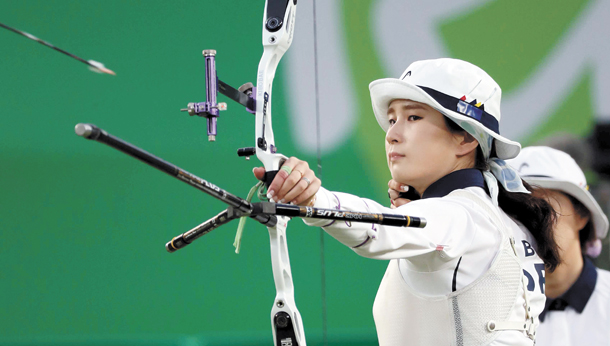 Korean archer Ki Bo-bae shoots an arrow during the women’s archery team competition in Rio Olympics at Sambadrome, Rio de Janeiro, Brazil, on Sunday. Ki and the rest of the Korean team made history by taking its eighth successive title from the event. [NEWSIS]

There may have been trials and errors for Korea’s Chang Hye-jin, Choi Mi-sun and Ki Bo-bae on their journeys to the Olympic podium. But failure was not in the cards for the trio in their run to extend Korea’s reign in the sport of archery.

The opening weekend of the 2016 Summer Games witnessed Korea’s formidable hold over archery once more, when its women’s archery team found themselves on top of the podium in the archery range at Sambodromo in Rio de Janeiro, Brazil, on Sunday. The women’s team clashed with Russia in the gold medal match and topped the Russian side with a set score of 5-1 (59-49, 55-51, 51-51).

This marked Korea’s eighth consecutive team title in the Games, a title that Korea held on to from 1988, when the sport became official medal event for the first time, to now.

With the expectation to take the baton from their seniors, who dominated the sport for nearly two decades, the pressure to not cut short such a legacy could have been overwhelming. This pressure was multiplied on Sunday when heavy winds started to blow during the match against Russia.

As wind can of course force arrows to fly wantonly and miss their targets, this was an unbelievable challenge. For Russia’s Tuiana Dashidorzhieva, Inna Stepanova and Ksenia Perova, wind seemed to be the enemy of the day, even more so than their Korean counterparts. The Russian archers simply could not calculate the wind into their play, consistently failing to land the arrow near the center of the target.

But for Chang, Choi and Ki, the wind seemed to affect them less. As the matter of fact, the Korean archers seemed to have a good grasp on how to take it into the consideration. Out of six arrows in the first set, five sent by the trio landed within the innermost circle, designated as being worth 10 points.

After taking an easy two points from the first set, the trio tallied two more in the second set by landing four arrows inside the gold circle. Up to this point, Ki, a 28-year-old archer and reigning gold medalist of the individual event from the 2012 London Olympics, had nailed all her arrows inside the gold circle. The trio outscored the Russians by four points in the second set.

The trio wasn’t as dominating in the third set, tying the round with a score of 51 with only one arrow near the center. Nevertheless, taking one point from the set with a draw, Korean archers thrust their fists in the air, while the Russians consoled each other.

Impressive as the feat may be, what’s more astonishing is the rarity of any nation so utterly dominating a sport as Korea does with archery.

Looking at various events around the globe, it is almost impossible to find a nation with a comparable record. At best, there is the U.S. “Dream Team” in basketball, who are considered unparalleled.

Naturally then, the Korean trio was bombarded with questions after their win about the secret behind their success.

While they said practice makes perfect, they also cited the competitiveness and dedication to the sport in Korea. “Fair competition is our motto and so we don’t give perks to athletes that have excelled in the past,” said Kim Ki-chan, the vice president of the Korea Archery Association, after the archery team for the Olympics was decided in April.

The Korean national archery team’s selection process is infamous for its competitiveness, and even athletes that have previously medaled, such as Ki, are given no special privileges. In fact, Ki, who brought home two golds at the London Games in 2012, couldn’t attend the 2014 Asian Games in Incheon because she failed to qualify for the Asian Games national team.

Many archers agree that such a merciless qualifying process is what makes Korean archery so competitive and superb. “For Korean archers, even the qualifiers are great competitions since the Korean archers are all top-ranking athletes and thus their global rivals,” said Moon Hyung-chul, the head coach of the national team.

After the arduous journey that brought them to Rio, Chang, Choi and Ki, as well as the three male archers, Ku Bon-chan, Kim Woo-jin and Lee Seung-yun, will now aim to achieve an even greater feat - a complete medal sweep in the sport of archery during this year’s Summer Games.