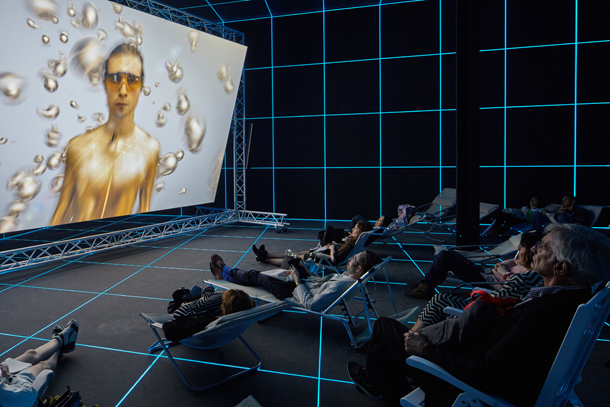 Visitors to the German pavilion of the 2015 Venice Biennale watch German artist Hito Steyerl’s video piece “Factory of the Sun.” The work will be shown at the upcoming 2016 Gwangju Biennale. [HITO STEYEL & ANDREW KREPS GALLERY/MANUEL REINARTZ]

Family-friendly exhibitions have dominated the Korean art scene this summer, but come September, several festivals appealing to more progressive tastes will take their place. Here are overviews of three biennials among them.

Under the odd title “Neriri Kiruru Harara,” the Seoul Museum of Art (SeMA)’s biennial festival focused on new media art, Media City Seoul, will kick off on Sept. 1 at the museum’s four branches.

The words “neriri kiruru harara” were coined by the famous Japanese poet Shuntaro Tanikawa in a poem to describe unknown acts by a Martian, according to the event’s organizers.

But the theme of this year’s festival is not extraterrestrial life but the future of humans, which is “seen through the language of art and media from neither a utopian nor dystopian view,” according to Beck Jee-sook, the biennial’s curator, during an event in March.

Sixty-one teams of artists from 23 countries will participate in Media City Seoul, according to the final list announced by the SeMA last month. They include many female artists from non-Western countries including Mounira Solh of Lebanon, Cinthia Marcelle of Brazil and Cha Jae-min of Korea, as well as famous male Western artists such as Pierre Huyghe of France and Ugo Rondinone of the United States.

“To provide a balanced view of contemporary art, we have invited more artists based in Africa and Latin America, as well as female artists, than before,” said Kim Hong-hee, director of SeMA.The event will run until Nov. 20. 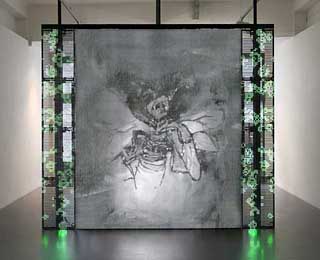 French artist Philippe Parreno’s installation will be also part of the 11th edition of the Gwangju Biennale that starts on Sept. 2. [GWANGJU BIENNALE]

This event, one of Korea’s biggest and most internationally renowned contemporary art shows, will begin at the Gwangju Biennale Exhibition Hall and other venues in the southwestern city on Sept. 2. The title of this year’s show, which runs through Nov. 6, is “The Eighth Climate (What Does Art Do?).” Maria Lind, curator of this year’s biennial, told the press in May that she and her team were interested in art in the sociopolitical context and “its potential to connect dots between already existing activities and people near and far.”

Accordingly, many of the works to be presented by 97 teams of artists from 37 countries are expected to deal with sociopolitical issues. Among the participants are Iran-born, Berlin-based artist Natascha Sadr Haghighian; Lebanon-born, New York-based artist Walid Raad; German artist Hito Steyel and French artist Philippe Parreno.

“As site-specific works represent a large part, 40 percent of the exhibits will be new works that are unveiled to the public for the first time, “ Lind said.

According to the organizers, the Eighth Climate, also known as mundus imaginalis in Latin (the imaginal world), was conceived by the 12th century Persian mystic and philosopher Sohravardi. As an addition to the seven physical climates of the earth identified by ancient Greek geographers, “the Eighth Climate is not based on a separation of matter and spirit, history and myth,” the show’s homepage reads.

This year’s edition of the biennial art festival will start on Sept. 3 at the Busan Museum of Art and at the Kiswire Suyeong factory in the southeastern port city of Busan. The title of the show, which runs through Nov. 30, is “Hybridizing Earth, Discussing Multitude.” The exhibitions will be divided into two parts. Project 1 features Chinese, Japanese and Korean avant-garde art from before the 1990s, while Project 2 will feature the history of global art biennials and their evolution since the 1990s. About 120 teams of artists from 23 countries will participate.