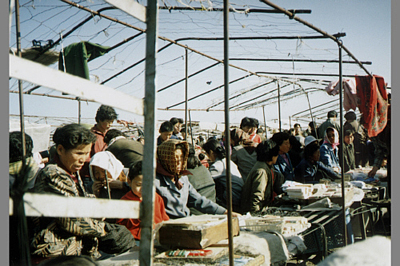 A market in North Korea.

An unfortunate sign looms in North Korea that the country may have to go on another “arduous march.” Come to think of it, the past four years and 10 months of Kim Jong-un’s reign have been a good time. The North’s economy, which recorded negative growth since 2007, saw 0.8 percent growth in 2011. Since then, its economy grew over 1 percent every year for four years in a row.

Anthracite contributed the most to this growth. The North exported anthracite to China at the price of $100 per ton and received over $1 billion every year. This is 10 times higher than the money the North collected annually from the Kaesong Industrial Complex. North Korea’s foreign trade, therefore, nearly doubled from $4.7 billion in 2010 to $7.6 billion in 2014.

Furthermore, North Korea earned about $200 million annually from its 60,000 overseas workers, including 20,000 in Russia, 19,000 in China and 10,000 in the Middle East. Marketplaces in the North increased to 500 across the country. Thanks to the development, the young ruler was able to live an extravagant life. He opened the Masikryong ski resort and Munsu Water Park in 2013. He also built a high-rise apartment complex along the Daedong River referred to as “Pyongyang’s Manhattan.”

Kim didn’t hesitate to test nuclear and missile programs. During his 4-year reign, the North fired 32 missiles, twice as many as the 16 missiles his father Kim Jong-il fired during his 18-year rule of the country. As the source of Kim’s power is foreign currency and the lifeline of the people is the marketplace, the past four years were a golden time.

But the situation began turning the opposite direction since last year. First, the price of anthracite halved to $50 per ton. As the Chinese economy — which comprises 91 percent of the North’s trade — slowed down, the consumption of anthracite also decreased.

As China became more sensitive to environmental standards due to air pollution, the North’s anthracite has no place in the country. As a result, the North’s trade plummeted to $6.2 billion last year, recording a 17.9-percentage point drop from the previous year. It also marked the first decrease in six years.

As the Russian currency lost its value, the North’s workers there also found their wages plunging. Furthermore, the Kaesong Industrial Complex was shut down and UN sanctions are pressuring the North’s economy.

The omen of the North Korean economy led to a rapid increase in the number of defectors. The Ministry of Unification said that 815 North Koreans escaped their homeland from January to July this year, up by 15.6 percent from the same period last year. After Kim reinforced measures to stop defections in 2011, the number of defectors went down to 1,276 last year from the average of 2,000 in previous years. But the number started to increase again.

Most of all, it is noticeable that North Koreans living overseas are increasingly defecting to the South. Over the past three years, 46 have escaped their countries. This year, restaurant workers in China and laborers in overseas sites are increasingly defecting to the South en masse. The group defections appeared to be triggered by the increased pressure from Pyongyang to earn more foreign currency.

“It has become a recent trend that North Koreans are coming to the South to meet with their families who already defected or to find a better life,” the Ministry of Unification said. In the past, they defected to make ends meet or for political reasons. Now, North Koreans are leaving their country because they feel the limits of the Kim regime.

The regime’s security is always threatened the most when the economy is declining. Kim promoted the two-track policy of pursuing a nuclear program and economic growth at the same time. He may succeed in his nuclear and missile programs, but the problem is the economy. The North once endured the arduous march, but a young math genius and a military general have now joined the string of defections. The North’s elites are losing their loyalty to the regime and turning their backs on the country.

Now, the South must start looking into the bigger flow of the North Korean economy, taking a step away from the North Korean nuclear and missile programs and the controversy surrounding the Terminal High Altitude Area Defense (Thaad) antimissile system’s deployment. Even Karl Marx underscored that infrastructure — the economy — determines superstructure, which is politics.


*The author is the senior editorial writer of the JoongAng Ilbo.