Cost of vacationing in Busan, Jeju rises in July

Cost of vacationing in Busan, Jeju rises in July 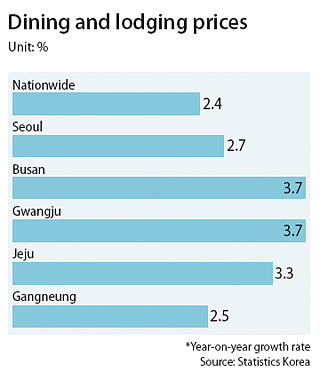 Even though the national inflation rate hit a 10-month low in July, government data shows that consumer prices in Korea’s major vacation locations - Busan and the southern island of Jeju - rose more compared to the previous year, indicating that more expensive prices are being charged to both local and foreign tourists during the vacation season.

“It is unclear whether the hike is due to the holiday season, since the figure for Gangneung in Gangwon, another popular tourist destination, didn’t grow as much compared to the previous year,” said Woo Young-jae, a director at Statistics Korea. “However, it is true that Busan and Jeju are where a lot of people go for their vacations and that prices rise in general during the holiday season.”

The price of local delicacies in Busan and Jeju Island soared as well in July compared to the previous year.

The price of raw fish in Busan rose 14.4 percent and 12.9 percent in Jeju. This is more than double the nation’s average of 4.9 percent in July.

Pork ribs and samgyeopsal, or pork belly, are foods that many tourists choose to eat while they visit Jeju Island. Their prices rose 4.3 percent and 6.6 percent, respectively in Jeju this year. The average growth rate for pork ribs and pork belly across the country was only around 2 percent in July.

Meanwhile, the holiday season didn’t have much impact on consumer prices across the country.

The price of beer only rose by 2 percent year-on-year, and that of chicken rose 0.3 percent.

In fact, the prices at theme parks rose 4.4 percent year-on-year and group tour packages to foreign countries increased by 2.6 percent during the same period. However, prices of domestic flights dropped 4.2 percent and the figure for international flights fell 2.9 percent, largely thanks to low crude oil prices.