‘Run Off’ brings the thrills but lacks any novelty

‘Run Off’ brings the thrills but lacks any novelty 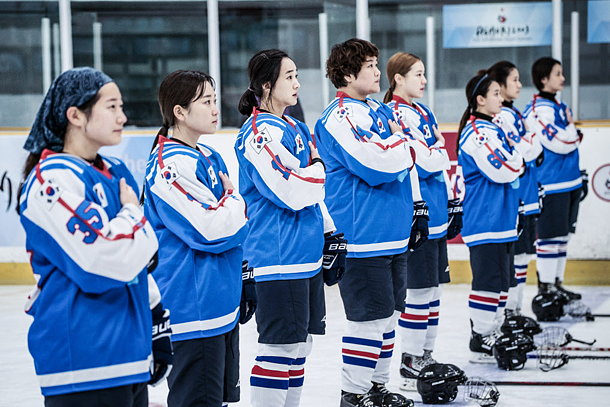 A still from “Run Off,” loosely based on a true story, which depicts the founding of Korea’s women’s national ice hockey team. Actress Soo Ae, third from left, best known for her past feminine roles, plays a tough, no-nonsense North Korean defector. [MEGABOX]

After the 2009 hit “Take Off” proved that a sports movie about an unpopular sport - ski jumping, in that case - could still draw a large audience, now comes “Run Off,” which shows the founding of Korea’s national women’s ice hockey team.

This time, the audience can watch as the Ice Hockey Association improvises and puts together a team of misfits for the 2003 Asian Winter Games in Aomori, Japan. Having trouble finding women interested in the sport, they take whoever they can get. Even the coach, Kang Dae-woong (Oh Dal-su), is chosen solely because nobody is willing to lead a new team everyone expects to fail.

They get off to a bad start, as everyone struggles to get along. Each member is unique, and Ji-won and Chae-kyung seem particularly incompatible. But over time, all six women are able to find common ground, and eventually, they qualify for the Winter Games. However, their final game happens to be against North Korea, and a surprise awaits Ji-won on the ice.

Based on a true story with some fictional elements added, the story follows a predictable trajectory, but director Kim Jong-hyeon wraps everything up neatly and manages to includes everything needed for a solid sports movie. Through teamwork and training sequences, the movie shows how unlikely friendships can blossom, as well as how passion and practice allow people to achieve their dreams.

One of the film’s most impressive elements is the immersive cinematography, which puts the audience at the center of the action and on the edge of their seats. It captures the speed and thrill of the games, albeit somewhat inaccurately - body checks aren’t allowed in women’s hockey, and yet there are many of them in the movie.

“I wanted to express the charm of ice hockey,” explained director Kim Jong-hyeon at a press screening event held on July 26 at Coex Mall in Gangnam District, southern Seoul. “If there are no body checks, it is really hard to express its speed and intensity. Thus, even though it doesn’t perfectly reflect the truth I decided to include it.”

Regardless of the creative liberties it takes, there’s much to celebrate about the film. It benefits from a stellar, star-studded cast who keep scenes realistic and full of raw emotion. It also features a witty script that will make viewers of all stripes identify with the unique cast of characters. It’s hard not to cheer them on, sharing in both their joyful and sad moments as they develop a passion for ice hockey.

Watching the film, it’s also clear how much time the actors spent training, both on and off the ice. Preparation began months before shooting started, and while there were several transformations, none were quite like that of Soo Ae. Known for her past feminine roles, the actress is convincing as the tough, no-nonsense Lee. More impressively, she decided to speak in the North Korean dialect to be more true to the character, even though she wasn’t required to do so.

“Because it’s a sports movie, I already expected it to be physically tough,” she said at the press screening.

For the training camp scenes, the group filmed from dawn until dusk.

“The training process was long and hard,” said Oh, who cut her hair short for the movie for a more tomboyish image.

Still, “Run Off” is far from perfect. It can feel slow paced at times - a consequence of having to explain six different back stories - and it doesn’t delve as deeply into the women’s journey as it could. The film also lacks any particularly surprising elements, offering just what you’d expect from a sports story about a band of misfits that beat the odds. But despite its flaws, “Run Off” can definitely stand up to its predecessor. Whatever it lacks in depth is compensated for with its genuine humor, exciting matches and charming details. Though not overly original or innovative, the movie can still score with audiences.

The movie, rated 12 and over, opens nationwide on Wednesday.