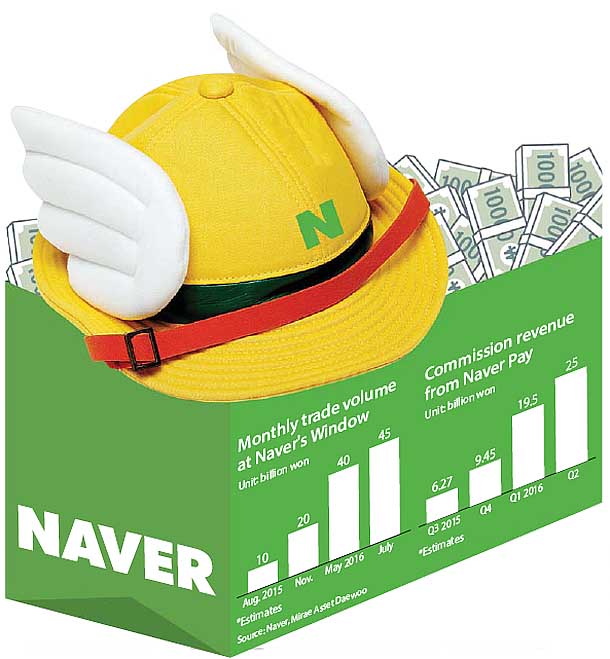 Lee Dong-jin, a 32-year-old office worker, has rarely had to log in to his mobile shopping app recently. Instead, he does most of his retailing online directly through Naver, the country’s top portal site.

“I go to Naver Shopping, compare the prices that the site provides, pick what I wish to purchase, log in with my Naver ID and pay with Naver Pay,” he said.

Naver, a search engine giant based in Bundang, Gyeonggi, that commands over 70 percent of the market share in Korea, has been gradually expanding into online commerce in the past couple of years. In 2014, the company faced mounting criticism for trying to monopolize the online shopping realm and dominating over smaller players, forcing Naver to scale back its advance into online commerce, including shutting down its site ShopN in June that year. The service allowed anyone to register themselves as sellers on the site in return for a commission.

But since late 2014, Naver has been ramping up its online commerce business again by launching related platforms. In December 2014, the company unveiled Shopping Window, a platform similar to ShopN except for the fact that sellers are not charged to use it. It introduced Naver Pay, an online payment system in June 2015. Coupled with its existing Naver Shopping service that provides price comparisons for goods sold at different sites, the three tools form a seamless online shopping experience that requires no need to open up other websites or apps.

Jeon Hee-chang, a clothing store owner in Busan’s Geumjeong District said he has never seen his 10-year-old business doing so well since he began selling his clothes through Naver’s Shopping Window in December 2014. His monthly revenue has hovered above 400 million won ($360,000).

“I did not fully trust the promise from Naver that it wouldn’t charge any commission when I first entered Shopping Window,” he said. “The decision has turned out to be hugely successful. I think the enormous number of daily visitors to the portal site naturally helps gather customers.”

As of July, 6,000 sellers have joined Shopping Window, raking up a combined monthly revenue of 45 billion won. Naver keeps to the principle of accepting only sellers with brick-and-mortar stores, handicraft workshops or factories to avoid competition against online shopping site operators.

At the moment, Naver does not charge any commission from sellers, but industry observers say there is the possibility that the company could someday begin imposing fees and accepting online-only sellers. Under that scenario, analysts say Naver’s destructive power in e-commerce could be astronomical.

Price comparison service Naver Shopping has already become a formidable player. After comparing the prices of goods they wish to buy at different online shopping sites, customers go to the one that offers the best deal.

Naver’s share in the price comparison market is nearly 70 percent, easily surpassing former powerhouses such as Enuri and Danawa. The revenue from advertising and commission on Naver Shopping grew 68.5 percent from the second quarter of 2014 to 55.8 billion won in the second quarter this year.

Naver Pay has been the best performer of the three pillars of Naver’s online shopping services. In just a year after its launch, Naver Pay has accumulated 11 million users, and the number of transactions surpassed 180 million, which translates into a trade volume of 2.5 trillion won.

That is more than double the 1 trillion won transaction volume that Samsung Pay, a mobile payment system on Samsung Electronics’ Galaxy smartphones, posted in May.

Naver Pay is also expanding the types of products sold, from tickets for stage performances and various events to accommodations packages.

“Most Koreans tend to set Naver as a default search engine on both mobile and web, and they are automatically logged in most of the time,” another online shopping site spokesman said. “That sustains Naver’s predominant position in shopping as well.”

A recent report from Kim Chang-kwon, an analyst at Mirae Asset Daewoo Securities, said Naver’s influence in e-commerce is already threatening existing leaders such as 11st, G-Market and Auction.

“If the consumer behavior of making shopping decisions and purchases on Naver continues, there is a high chance Naver could play both the roles of Google and Amazon.com in the United States, where the search engine market is led by Google and online shopping is led by Amazon.com,” he said.