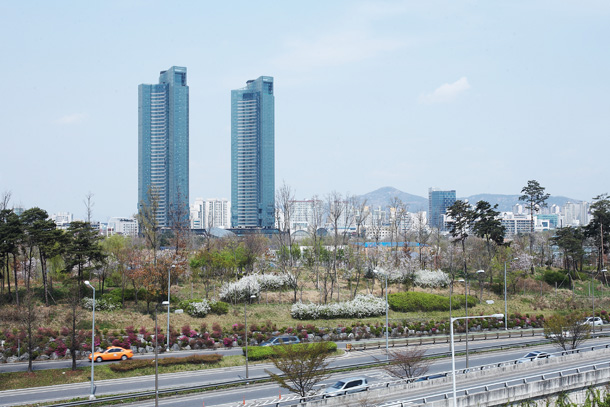 Hanwha’s Galleria Foret is considered one of the best high-end apartment complexes north of the Han River. [HANWHA E&C]

An apartment construction site around Ttukseom Station in Seongsu-dong, northeastern Seoul, has been covered in weeds for the past seven years, the result of an ambitious development project put on hold.

But lately, with the property market in the area showing signs of recovery, the construction company working on the site has announced it is ready to restart development.

The 18,200-square-meter (4.5-acre) plot was first purchased by Daelim Industrial in June 2005 for 382.3 billion won ($344.9 million). The construction company laid out an aggressive plan to build the most luxurious mixed residential-commercial complex north of the Han River, with hopes of topping even the upscale Samsung Tower Palace in posh Gangnam District, southern Seoul.

Then came the financial crisis of 2008. Housing prices fell across the board, and home buyers avoided the in-progress luxury complex, which was asking for 45 million won per 3.3 square meters (35.5 square feet). The apartments on sale measured 330 square meters, which means the preconstruction price on one unit would total 4.5 billion won.

With only 29 buyers showing interest, Daelim Industrial was forced to put its development plans on hold.

This time, the company has tamped down its plan, ditching the idea of supplying 330-square-meter apartments and instead offering smaller units between 181 and 207 square meters. The building’s height will also be lowered from 51 stories to 49.

“We plan to finalize our revised plans and submit it to the Seoul Metropolitan Government next month,” a Daelim Industrial official said. “We plan to construct a mid-to-large-size high-end apartment.”

Once it is approved by the government, the company will be able to start taking preconstruction bids on apartment units sometime between the end of this year and early next year.

The area around Ttukseom Station contains several high-end apartment complexes, since the station is located on subway line No. 2 and the Bundang line. Just next to Daelim’s construction site is the Galleria Foret, completed by Hanwha E&C in 2011. The complex consists of two 45-story buildings with 230 apartment units each.

The Galleria Foret is currently considered the best high-end apartment complex north of the Han River. According to the Ministry of Land, Infrastructure and Transport, a 331-square-meter unit in the Galleria Foret was sold at 4.8 billion won in May. When the complex was completed, the same apartment sold for 4.16 billion won.

Another high-end apartment complex in Ttukseom is Doosan’s Trimage, which will see residents moving in by May next year. The preconstruction price for a unit is 38 million won per 3.3 square meters.

Industry experts speculate that a new apartment in Daelim’s complex will be offered for an average 40 million won per 3.3 square meters.

“High-end apartments are forming with Galleria Foret in the center as [the Ttukseom area] not only has convenient public transportation and other convenient facilities but also a huge green space [the Seoul Forest],” said a real estate agent in Seongsu-dong.

Thanks to the development projects, the area around Ttukseom, once known as an industrial site, is undergoing a renaissance. Run-down factories in Seongsu-dong are getting major face-lifts, and last year, the Seoul Metropolitan Government laid out a plan to create a special cluster near the Seoul Forest by 2018 for young artists and designers to start their own businesses.

Seongdong District, where Seongsu-dong is located, currently has 40 or so knowledge-based centers run by large companies like SK and Kolon. Cafes, restaurants and art galleries targeting young consumers are also popping up in the neighborhood.

As a result, the average rent for commercial stores in the neighborhood has risen. According to real estate information provider Budongsan 114, rent for 3.3 square meters of commercial space has gone up from 60,864 won in 2014 to 90,967 won as of the second quarter this year.

“The knowledge-based industrial centers and start-ups will speed up the vitalization of commercial areas,” said Ham Young-jin, head of the research center at Budongsan 114.

Some experts say, though, that Seongsu-dong’s popularity may not grow to compete against more popular neighborhoods south of the Han River in Gangnam, largely because apartment prices are also determined by public transportation convenience and good neighborhood schools, two qualities that Ttukseom currently does not have over Gangnam.