Park rips into reps visiting Beijing to talk about Thaad

Park rips into reps visiting Beijing to talk about Thaad 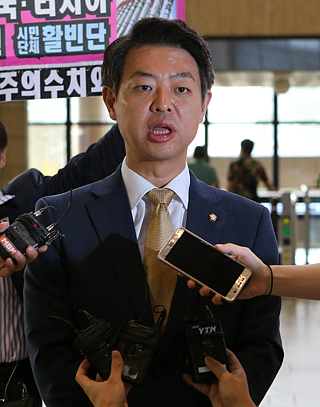 President Park Geun-hye Monday lashed out at political rivals’ opposition to the deployment of a U.S.-made missile defense system, saying issues of national security should be bipartisan.

The president’s sharpest criticism was aimed at six first-term Minjoo Party lawmakers who embarked on a three-day visit to Beijing on Monday, describing them as siding with Beijing on the missile system deployment, which it vociferously opposes.

At a regular senior secretariat meeting at the Blue House, Park noted it was the basic responsibility of politicians “to work in a bipartisan manner and avoid creating internal divisions when it comes to issues of national security.”

She said some lawmakers in recent days had made “nonsense remarks” that Seoul is inviting attacks by Pyongyang with its decision to deploy the Terminal High Altitude Area Defense (Thaad) system - which was no different from North Korea’s argument against Thaad, she said.

“There should be no partisan differences when it comes to issues dealing with the lives of the people,” Park said in an apparent effort to rally public support behind her government’s decision to set up a Thaad battery in Seongju County in North Gyeongsang by the end of next year.

Park indicated she considers objections raised by opposition lawmakers to be no different from siding with North Korea on the Thaad issue and of harming national security.

Noting that her government was making far-reaching diplomatic efforts to induce Pyongyang to end its nuclear program, Park chastised the six Minjoo lawmakers taking the trip for having “failed to understand such diplomatic endeavors by the government.”

The trip has sparked a backlash from both the presidential office and the ruling Saenuri Party, which went so far as to brand it as a “diplomatic humiliation” and “flunkeyism.”

The Blue House strongly urged the six lawmakers to refrain from making the trip a day before. The presidential office also issued a scathing criticism of Beijing, saying the latter’s protest of the Thaad decision was unreasonable and suggesting that it more actively confront Pyongyang in times of provocations.

Park also indicated she had no intention to backpedal on her decision to deploy the Thaad, saying she was “determined to face whatever criticisms” to protect the people.

The six Minjoo lawmakers brushed off Park’s withering remarks and said it was the Blue House that was playing into the hands of Beijing by overreacting to their trip.

“I think it is an utterly unwise move [by the government] to keep citing submissive diplomacy [in criticisms of the trip]. Such partisan clashes provide the Chinese media with a way of exploiting the issue [of Thaad] politically,” said Rep. Kim Young-ho of the Minjoo, who has a bachelor’s degree in international relations from Peking University, at Gimpo International Airport before departure. The first-term lawmaker also said it would spark a diplomatic controversy if he and the five other representatives cancelled their trip due to government pressure.

The Minjoo Party, which commands the loyalties of 121 lawmakers, is taking a so-called “strategically ambiguous” stance on Thaad by refraining from either supporting or objecting to it.