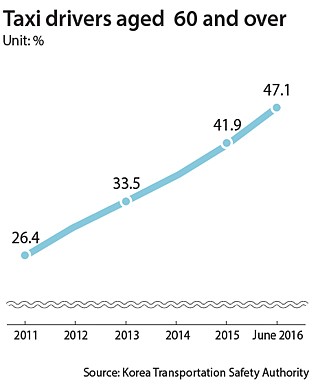 On June 23 at around 11 a.m., a taxi suddenly charged into a sidewalk full of pedestrians in Songpa, southern Seoul, resulting in one death. The 67-year-old driver, surnamed Lee, was transported to a nearby hospital for broken ribs. Police explained that the driver passed out from a heart attack.

There are growing concerns regarding the safety management of taxis driven by senior adults. In the recent years, there has been a surge of retiree taxi drivers, but the safety system has not able to keep up with the trend.

Among the total 278,936 taxi drivers in the nation, 62,404 are 65 years old or over, which accounts for 22.4 percent of the total, according to Korea Transportation Safety Authority. Taxi drivers over 60 are nearing half of the total, now at 47.1 percent, a significant leap from 26 percent in 2011.

In Geochang County, South Gyeongsang, a taxi driver surnamed Kim, 69, hit a car at an intersection that was heading towards him, leading his vehicle to skid off the road and kill a pedestrian. The accident occurred when Kim drove through the intersection without realizing the traffic lights had turned yellow. “It’s no secret that the reaction speed of older drivers is slow when they are faced with emergency situations on the road,” said Sul Jae-hoon, a researcher at the Korea Transport Institute.

The problem, however, lies in the inadequate response to the aging population of taxi drivers. In the case of buses, starting this year, drivers 65 and over are required to take an examination every three years to check whether they can safely maneuver a bus. When violating the regulation, bus drivers will be fined up to 500,000 won ($450) and the bus companies will also be fined 1.8 million won. But the qualification for taxi licenses is the same regardless of age, and requires that drivers take an aptitude exam every five years.

“When our drivers reach the retirement age,” said Kim Chung-sik, the president of OK Taxi, “they are required to get a medical checkup every year and drive with our entrustment contract. But privately-owned taxis have no such regulations.”

“There are many drivers who are capable despite their age,” said Park Kye-dong, chairman of the board of Coop Taxi. “There should be thorough examinations to judge whether they are qualified or not.”