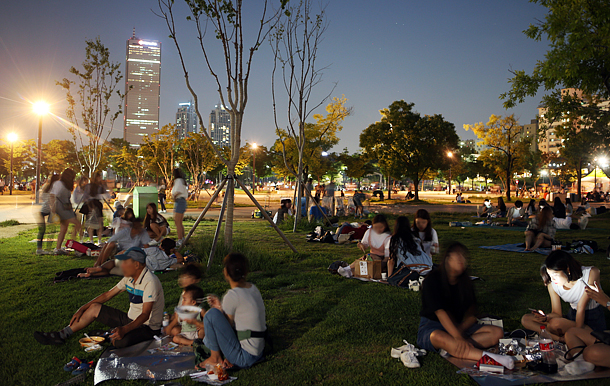 Seoul residents cool off at a park along the Han River on Sunday night, as the overnight low hovered above 25 degrees Celsius (77 degrees Fahrenheit). [KIM CHOON-SIK]

On Saturday, as the temperature hit an afternoon high of 34 degrees Celsius (93 degrees Fahrenheit), an apartment complex in Bundang, Gyeonggi, was on the brink of reaching its maximum power capacity.

An announcement came from the management office at 3 p.m. asking residents to “please turn down the air conditioner since we are experiencing high electricity consumption.” The same notice was sent again at 9 p.m., as the area was experiencing a tropical night low of 27 degrees Celsius.

Residents were reasonably perplexed by the request, since they knew the nation as a whole was not suffering from any kind of power shortage, as it has in summers past.

“I don’t understand why the electricity is running out during the first week of August, which is when large-size factories are all taking breaks,” said a 59-year-old man surnamed Kim, who is living in the complex that asked its residents to turn down the power.

It turns out the problem in Kim’s complex was not the energy supply but the transformer in his building delivering the power. With Korea’s car and shipbuilding factories on vacation since the first week of August, the electricity supply in the country should be enough to cover at least 113.5 percent of total electricity consumption across the nation, according to the Korea Power Exchange on Saturday.

Despite the ample supply, old buildings, especially in Bundang, where many apartments were built in the 1980s and ’90s, are ill-equipped to handle the large electricity demand.

“This is why we have no other option but to ask our residents to turn down the air conditioning at least during peak hours,” said a manager at the complex.

That particular building in Bundang was built in 1993, and the transformer dates back to the same year. The unit now services 800 households living in the apartment complex.

“It cost about 20 million won [$18,000] to buy a new transformer that can handle consumption for 1,000 households, and they would have to pay installation fees on top of it,” said a businessman who sells used transformers. “Apartment management offices just have a hard time asking their residents to pay extra fees.”

Transformers pull down the 22,900-volt electricity provided by the Korea Electric Power Corporation to 220 volts, the level used by residential consumers. The units can be blown out if electricity use is higher than they can handle. Indeed, the largest cause of power outages in the country, according to the Korea Electrical Safety Corporation, is overheated transformers.

Many of the apartment buildings in suburban towns such as Ilsan in northern Gyeonggi and Bundang in southern Gyeonggi were constructed during a building boom in the late 1980s and early 1990s, and most contain transformers that can manage 1 kilowatt an hour per household.

Since then, electricity consumption has risen significantly, and most newly-built apartment buildings are equipped with transformers that can handle 3 kilowatts an hour per household.

But many of the old buildings still retain the lower-capacity transformers, and this has led to a large number of power outages. They have especially become a menace this summer, as the country is experiencing abnormally hot weather.

One of the problems is a lack of specific regulations and laws to manage safety issues for transformers. While it is mandatory for building managers to inspect and report accidents related to gas lines, there are no such rules for transformers. As a result, no one knows exactly how many power outages or problems occur due to blown-out transformers.

“Transformers used for more than 20 years can’t be fixed or improved, and the only way to solve the problem is replace them with new ones,” said Lim Jong-min, a director at the Korea Electrical Safety Corporation. “Apartment residents should care more about transformers rather than just focusing on how the new paint job on their apartment building will look.”