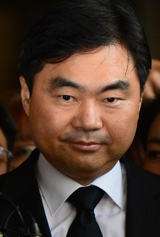 The Ministry of Justice finalized its decision to dismiss senior prosecutor Jin Kyung-joon, who is mired in a bribery scandal and detained by prosecution, it announced Monday. Jin is the first director-level official of the prosecution’s 68-year history to be dismissed.

Given that public prosecutors are dismissed when they are impeached by the National Assembly or imprisoned under criminal sentences, according to the Prosecutors’ Office Act, the ministry’s decision to dismiss Jin is not only unprecedented but momentous. The ongoing probe into Jin revealed that he received some 950 million won ($853,630) in bribes from Nexon co-founder Kim Jung-ju, who has also been indicted.

According to prosecutors, Jin received 425 million won from Kim in 2005, and bought unlisted Nexon shares with the money. A year later, Jin sold them for 1 billion won, and he then used that money to buy shares of Nexon Japan, which he sold last year for some 12 billion won.

Jin is also accused of receiving as a bribe a Hyundai Genesis leased by NXC Corporation, where Kim is the current CEO. Jin drove the car from 2008 to 2009 and then allegedly kept it. From 2005 to 2014, Jin also received from Kim some 50 million won over the course of 11 transactions to pay for family vacation trips, according to prosecutors.

If Jin is found guilty, all profits he raked in illegally can be confiscated.

The Justice Ministry’s decision was reached by its disciplinary committee of public prosecutors on Monday morning. A team of prosecutors led by Lee Keum-ro, chief prosecutor of the Incheon District Prosecutors’ Office, had requested that the ministry dismiss Jin when it indicted him on July 29.

Jin will also be charged by the prosecution some 10 million won as a disciplinary fine.

Since 2014, public officials who receive bribes or embezzle public money can be slapped with fines up to five times the amount they took.

“The money Jin received from Kim for family trips in December of 2014 amounts to roughly 2 million won,” said a Justice Ministry official. “So we are charging him five times that amount.”

The opposition parties, the Minjoo Party of Korea and the People’s Party, meanwhile, motioned a joint bill on Monday to establish a new and independent agency to investigate high-ranking public servants, including the president.

“The recent happenings of a senior prosecutor being detained for taking bribes and a former chief prosecutor of a district prosecutors’ office being accused of tax evasion has brought to light some serious corruption among public officials,” the bill read. “There is high need for an independent agency able to thoroughly investigate and indict public officials for their corrupt actions.”

An investigation can commence when there is a request from the Board of Audit and Inspection of Korea or the National Human Rights Commission, or when a tenth of the incumbent lawmakers of the National Assembly requests one.

A bill to establish such an independent investigative agency overseeing public officials was initially proposed in 2002, and has been proposed nine times since, but the bills have never been passed at the National Assembly and have been discarded each time at the end of the Assemblies’ terms.

Given that opposition lawmakers outnumber the ruling Saenuri Party in the current legislature, the possibility that the bill proposed by the liberal parties may pass is higher than ever before. The Minjoo Party occupies 121 seats, the People’s Party 38 and the Justice Party six in the 300-member National Assembly.