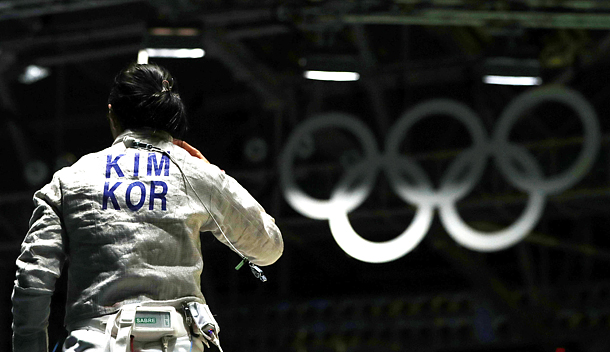 Korean sabre fencer and gold medalist from the 2012 London Olympics Kim Ji-yeon is stunned after suffering an upset by Italy’s Loreta Gulotta in the round of 16 on Monday at Carioca Arena 3 in Rio de Janeiro, Brazil. [JOINT PRESS CORPS]

The drama of a great upset is one of those rare Olympic moments that stir the hearts of spectators around the globe. And of course, any athlete would love to be the one to defeat greats like Michael Phelps or Usain Bolt, but Koreans competing in archery, judo and fencing recently found themselves on the other side of this story.

This was precisely the case on the third day of the Summer Games in Rio de Janeiro, where heavily favored Korean athletes such as archer Kim Woo-jin and judoka An Chang-rim were knocked out of competition early in their events.

Kim had just come out of helping the Korean men’s team clinch gold on Saturday for the first time in eight years. In the gold medal match, five of his six arrows hit gold, the innermost circle designated as being worth 10 points. Just a day before, the 24-year-old had set a 72-arrow world record during the men’s preliminary stage by scoring 700 points. Going into the final event, he seemed a surefire winner.

But of the 12 arrows he let fly, only four hit the gold circle. “I tried to adjust to the wind and change my aim as I thought fit,” Kim said after the match, “but I think that threw me off.”

He added, “But I cannot blame circumstances.”

In judo, Korea’s gold drought continued. Just a day after An Ba-ul, the No. 1 judoka in the world in the 66-kilogram (145.5-pound) category, became another Olympic casualty in a stunning defeat by Italy’s Fabio Basile, who is ranked No. 26, his teammate An Chang-rim, No. 1 in the 73-kilogram category, suffered a similar, if not worse, fate.

Like Ba-ul, Chang-rim, who left Japan to wear the Korean flag on his uniform, was considered a shoe-in for gold in his category. But to everyone’s surprise, Chang-rim’s run to the podium was cut short by Dirk van Tichelt of Belgium in the round of 16. An had a dazed look after the match, and fans later criticized the fact that the Belgian judoka received no penalty for his passive play after taking the lead, which is technically illegal.

This is the third time that a top-ranked Korean judoka stepped off the mat with no gold, and the second time that a Korean judoka finished empty-handed. Kim Won-jin, No. 1 in the world in the 60-kilogram category, was knocked out of the competition early in the quarterfinals on Saturday. Kim could not resuscitate his chance even during the repechage contest.

But while Korea’s judokas at least have two silvers, its fencing team is still without a medal this year. On the first day of the Rio Olympics, Shin A-lam, an epee fencer who suffered a controversial loss during the 2012 London Olympics, failed in her bid for redemption. She was knocked out of the competition after losing to Ukraine’s Olena Kryvytska in the round of 32.

To make matters worse, Kim Ji-yeon, the reigning gold medalist from the 2012 London Game in sabre, ended with no accolades in the individual event, as she was defeated by the Italian fencer Loreta Gulotta on the third day. Kim is now the third sabre fencer to be eliminated form the Rio Games after Seo Ji-yeon and Hwang Seon-a, who were eliminated on Monday as well. But all is not lost for Korea’s fencers.

“In the individual event I am finished,” Kim said, “but I still have the team event to look forward to.”

In addition to team events, some male fencers still remain in the Olympics, as well as Nam Hyun-hee, a veteran foil fencer who aims to take her third Olympic medal.

Elsewhere in the Olympics so far, Novak Djokovic, a Serbian professional tennis player who is currently ranked world No.1 in men’s singles tennis, was knocked out of the Olympic men’s singles event in the first-round after a loss to 2009 U.S. Open champion Juan Martin del Potro of Argentina. He suffered another loss on the third day in men’s doubles, leaving no chance for himself to tally any medal this year.

Olympic gold has always eluded the Serbian tennis player, who won a bronze in the 2008 Beijing Games and finished fourth in the 2012 London Games.