Late one Saturday afternoon in Hongdae, the hip bustling area near Hongik University, a bicycle rickshaw could be seen darting through the crowds of tourists and young couples in the neighborhood’s notoriously packed alleyways.

“Hold on tight!” the cyclist yelled as he took a group of visitors from Busan on an hour-long guided tour with his pedicab, a service provided by an area start-up called Hey Rider.

“More tourists are visiting Hongdae in search of tourist attractions, and we thought of an item that could substitute transportation since the area is too crowded for cars,” said Chung Jae-hwan, CEO of Hey Rider, which targets tourists looking for taxi options and easy transport. “This is our third year in business, and we are close to hitting 300 million won [$270,000] in revenue.”

As entrepreneurs with novel ideas crowd around Hongdae and nearby Hapjeong-dong, a so-called Honghap Valley is forming in Mapo District, western Seoul. 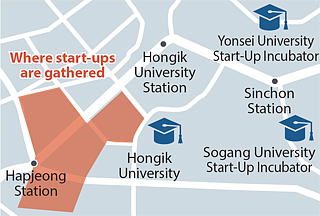 According to market research firm Rocket Punch, 235 of the 2,000 start-ups it surveyed were based in Mapo District, the second-hottest spot after Gangnam District in southern Seoul, which is home to 786 start-ups.

Major start-ups based in Honghap Valley include Tumblbug, a crowdfunding platform; Cizion, a service that provides marketing through comments on social media platforms; and Mr.Blue, a webtoon production and distribution platform.

“One or two small enterprises began operations in the area in 2010,” said Jeong Woo-yeol, founder of Zamong Communications, a design and content provider that was one of the first ventures in Honghap Valley. “Then start-ups began crowding in around three to four years ago.”

Companies began moving into Sangam-dong, the westernmost neighborhood in Mapo District, attracted by a number of government-backed support programs. They then started migrating further east, settling near some of the country’s leading universities. The eastern part of Mapo District includes Hongik University, Yonsei Univeristy, Sogang University and Ewha Womans University, giving the start-up scene a boost from students and graduates looking to start their own businesses.

Start-ups based in Honghap Valley have largely been influenced by the street culture of Hongik University, renowned for its arts department. Many start-ups in the area are engaged in art, design, food and beverages, education and content creation. Applying information technology to art and culture is one of the major tenets held by many start-ups in the area.

Some of the newer businesses in the area also cater to foreign tourists. Cuddly, a delivery service start-up for Chinese students and tourists is among them, along with Raon Baggage Storage, which handles luggage storage.

Despite the fledgling start-up community, Honghap Valley still has a long way to go as a major incubator.

Industry insiders point to the lack of infrastructure for start-ups as a major reason for the high company folding rate.

“Hey Rider was able to attract investment because its business was related to tourism, but most start-ups in the area are suffering from lack of financial support,” said Chung of Hey Rider.

Networking between start-ups is also difficult. While Honghap Valley Open Space provides office and community space for start-ups, entrepreneurs say it is not enough.

“The high rental fees are also a big burden for start-ups,” said a spokesperson from start-up Cizion. “As Yeonnam-dong is a hot spot, rental fees have soared, with some places even more expensive than in Gangnam.”

According to a market research firm, office rental fees in Hongdae and Hapjeong-dong jumped 9 percent over the last three years.

“As many of the start-ups are in their early stages with less than five employees, they sometimes just gather around cafes to have meetings,” said Shin Dong-hyuk, an executive director of Honghap Valley Open Space.

Team Place, a cafe in Mapo District, is often used by early-stage start-ups as a workspace since it offers separate office rooms and study rooms.

And the start-up boom is spreading out beyond Honghap Valley to nearby neighborhoods. Sinchon, an area adjacent to Hongdae, contains start-up support programs led by Yonsei University and Sogang University to help entrepreneurs get their businesses off the ground. A support center operated by gaming company Smile Gate called Orange Farm and business incubator Rehoboth G Campus are also stationed in the Sinchon area.

“Honghap Valley was formed naturally, but as its size and scope have expanded, the area is in desperate need of government support,” said Kim Tae-chang, head of cultural business consulting firm Playbig. “If systematic support is established, the valley could develop into something more like Teheran-ro in Gangnam District and the Pangyo Techno Valley in Gyeonggi.”