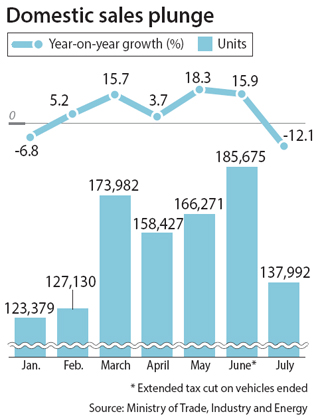 Car sales in Korea fell sharply in July after an individual consumption tax cut on vehicles expired on June 30.

According to the Ministry of Trade, Industry and Energy, domestic sales fell 12.1 percent year on year to 137,992 units in July. During the same period, exports fell 10.8 percent, and production dropped 14.9 percent.

“Production fell due to the strikes by the automobile industry’s labor unions last month,” said Lee Won-joo, a director at the ministry, “and domestic sales in general fell due to the end of the individual consumption tax cut.”

The ministry added that fewer business days were another factor that pulled down production last month. There were a total of 21 business days last month compared to 23 in the previous year.

Sales of locally-produced models fell 9.8 percent in July compared to the previous year, but their market share rose to 87.4 percent in the domestic market, recording the highest rate since January 2015.

And when looking at figures from the beginning of this year up to July, total sales of locally-produced vehicles rose 7.4 percent year on year to record 924,555 units.

By company, Hyundai Motor sales fell 20.1 percent year on year in July, as the popularity of models such as the Avante, Santa Fe and Tuscon waned. Kia Motors saw sales fall 8.7 percent, while General Motors Korea had a sales boost of 15.8 percent, largely thanks to their new Malibu and Spark models.

The figure for Renault Samsung Motors increased 9.7 percent, as the automaker launched new SM6 models and sales of the SM7 rose compared to the previous year.

“The number of import vehicles sold in Korea fell rapidly, and we believe some automakers’ emissions rigging scandals had impacts on the figure,” Lee said.

In fact, sales by Volkswagen Group and its luxury brand Audi fell 32.7 percent compared to the previous month.

“Exports to European Union countries continued to rise, but the overall number dropped as there were more domestic cars manufactured overseas and demand from the emerging markets fell,” Lee said.

Exports to the European Union rose 15.2 percent year on year, while the figure fell 24.9 percent in Latin America and 21.5 percent in the Middle East. Hyundai’s exports fell 16.9 percent, and that of Kia dropped 8.4 percent.

Exports of auto parts went down 10.6 percent in July to record $2.09 billion. The ministry cited a slowing economy in emerging markets as a main factor.

Meanwhile, foreign automakers are announcing new promotion events in order to boost their sales in Korea.

BMW Korea said it will offer its service package, BMW Service Inclusive Plus, at a 30 percent discount this month only. The package extends the warranty period from five years or 100,000 kilometers (62,000 miles) to eight years or 160,000 kilometers.

Customers at Nissan Korea can get a 24-month interest-free payment option or 1 million won ($900) worth of gas gift cards with the purchase of a Maxima model.

Honda Korea, Peugeot and Infiniti Korea are offering similar promotions throughout this month.