China sensitive about missiles in its northeast

China sensitive about missiles in its northeast 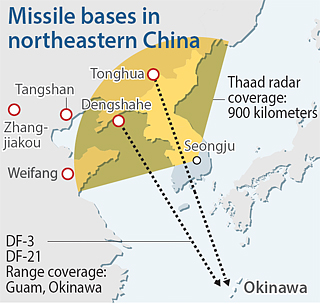 China is maintaining ballistic missile bases in its northeastern territories, all equipped with missiles capable of reaching U.S. bases in the Pacific including Okinawa, according to a report posted on the Federation of American Scientists (FAS) website.

The bases may explain Beijing’s strident opposition to the deployment of a U.S.-made anti-missile defense system in South Korea, as its presence could hamper China’s missile striking capabilities if conflict broke out on the Korean Peninsula.

In northeastern China, the People’s Liberation Army operates ballistic missile bases in Tonghua in Jilin Province, close to the North Korean border; Dengshahe in Liaoning Province; in Laiwu in Shantung Province; in Tangshan in Hebei Province; and in an area in close proximity to Beijing.

The Dongfeng series of ballistic missiles that China is operating includes the DF-3, DF-21 and DF-15 - all capable of carrying nuclear warheads. The DF-3 has a range of 3,000 kilometers (1,864 miles) while the DF-21 can hit targets within a range of 2,000 kilometers. The DF-15 has a shorter range of between 600 and 900 kilometers. According to the FAS report entitled “New FAS Nuclear Notebook: Chinese Nuclear Forces,” satellite imagery taken in April 2016 “shows three DF-21 launchers positioned on the launch pads,” which it described as a “transition from DF-3A in 2003.”

A U.S. Department of Defense’s annual report for Congress on the Chinese military released last April stated that DF-3s and DF-21s are on launch pads with an aim to strike U.S. military bases in Guam and Okinawa. The Pentagon also took note of an upgrade in Chinese missile striking capabilities over the past 10 years.

“As recently as 10 years ago, several hundred short-range ballistic missiles could reach targets in Taiwan, but China had only a rudimentary capability to strike many other locations within or beyond the first island chain, such as U.S. bases in Okinawa or Guam,” the Pentagon said in its report. “Today, however, China is fielding an array of conventionally armed short-range ballistic missiles (SRBMs), as well as ground and air-launched land-attack cruise missiles (LACMs), special operations forces (SOF), and cyber warfare capabilities to hold targets at risk throughout the region.”

China’s missile base presence near its border with North Korea has raised speculation among analysts that they could help Beijing interfere in a crisis on the peninsula just as China did in the winter of 1950 at the height of the Korean War.

The Thaad battery in South Korea could intercept long-range ballistic missiles in the air headed for U.S. bases in the Pacific to stop the U.S. from dispatching troops to the peninsula in case of a conflict. For a ballistic missile to hit Okinawa from China, it must fly over the Korean Peninsula, which will be covered by Thaad from Seongju County, North Gyeongsang, where the advanced missile defense system will be deployed by the end of next year. For a missile intended to hit U.S. bases in Guam, China could make it evade air space covered by Thaad by changing launch locations. DF-15s, with a maximum range of 900 kilometers, fall into the interception coverage of Thaad. “China has positioned its ballistic missiles toward the Korean Peninsula, Okinawa and Guam because of its commitment to intervene in times of a crisis on the peninsula stemming from the North’s collapse or provocation,” said a military official. “It is much more than a simple arms race with the U.S.”