Chinese reporters did not show

Chinese reporters did not show 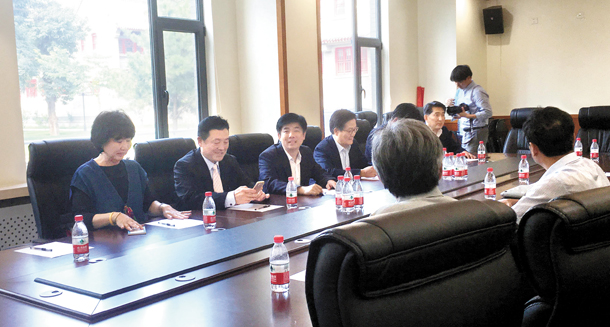 Six first-term lawmakers of the Minjoo Party attend a discussion forum with Peking University professors on Monday, the first day of their three-day visit to Beijing, at the university campus to discuss issues surrounding the Terminal High Altitude Area Defense system. Professor Kim Jin-ho of international relations at Dankook University attended the forum as a moderator. [SHIN KYUNG-JIN]

Not a single Chinese reporter was seen at a discussion forum arranged by six South Korean opposition lawmakers at Peking University in Beijing on Monday, despite Chinese media’s recent blitz on Seoul for its decision to deploy the U.S.-made anti-missile defense system in the country.

Six first-term lawmakers of the Minjoo Party, led by Rep. Kim Young-ho, who has a bachelors degree in international relations from Peking University and is said to have a wide personal network in Beijing, landed in the capital on Monday for a three-day visit to discuss the Terminal High Altitude Area Defense (Thaad) system and listen to protests by Chinese scholars and officials. The trip came at a sensitive time as tensions recently snowballed between the two neighbors over the Thaad issue with Beijing threatening economic retaliations. China carries significant economic weight for Korea, as more than 25 percent of Korea’s total exports a year are shipped to the world’s second largest economy.

The six newcomers to the National Assembly pushed ahead with the trip despite strong warning from the presidential office against the plan. Indeed, President Park Geun-hye on Monday went so far as to describe the six as siding with China’s position over the Thaad issue. Park also deplored what she termed as their failure to work in a bipartisan manner to deal with issues of national security.

Given all the controversy surrounding the six-member trip, it took Korean correspondents in Beijing by surprise that not a single Chinese reporter was at Peking University to cover the lawmakers’ discussion forum with Chinese professors to exchange opinions on the contentious issue.

One Chinese journalist predicted that the Chinese media would not give their visit heavy coverage as it is an unofficial visit. The journalist asked not to be named.

At the forum at Peking University, Chinese professors expressed their concerns that the deployment of Thaad would put geopolitical relations on the path toward a new Cold War. Some also anticipated tangible sanctions put forth by China on South Korea after the Thaad battery is set up by the end of next year in South Korea, without elaborating on what kind.

The six Minjoo lawmakers were scheduled to meet with Kim Jang-soo, Ambassador to China, upon landing in Beijing, but this was later cancelled. The Foreign Affairs Ministry in Seoul said Tuesday that the lawmakers requested the meeting be cancelled on Sunday, a day before the departure, possibly in the aftermath of growing controversy and criticism waged not only by the ruling Saenuri Party but also by members of their own Minjoo Party.

Instead of meeting the six lawmakers, Ambassador Kim met with Wu Dawei, China’s special representative for Korean Peninsula affairs. The ministry said Kim had delivered Seoul’s “firm stance on the Thaad deployment” during the meeting. On Thaad, the ministry spokesman said Wu reiterated China’s opposition to its deployment in South Korea.