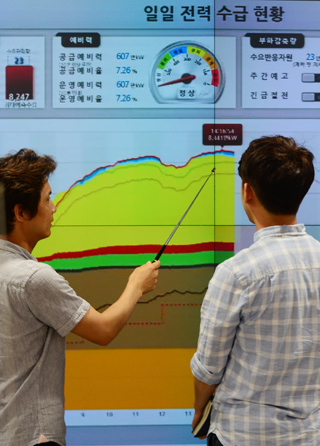 Demand was 93 percent of capacity. The government tries not to surpass the 85 percent usage level on any given day.

The Korea Electric Power Corporation and Ministry of Trade, Industry and Energy announced they will work to reduce electricity use across the nation through various measures, such as asking shop owners not to keep their doors open during operating hours.

“We will visit businesses in Gangnam in Southern Seoul and tell owners not to operate stores with their doors open,” said Chae Hee-bong, head of the energy resource division at the Trade Ministry in a press briefing Tuesday. “We are planning to fine them if they do so starting as early as next week.”

According to the Trade Ministry, the government is planning on fining retailers between 500,000 won ($451) to 3 million won. The government fined retailers for keeping their doors open during operating hours from 2013 to 2015. Earlier this year it said it wouldn’t resort to the measure.

In Korea, a progressive billing system is applied to household electricity usage, which means that people pay more per unit if they use more. For businesses and industries, there is no such system.

Developed countries like the United States and Japan also have a progressive stage system on household electricity, but the gap between lowest and highest rates is only 101.4 percent. Many Korean households try to use air conditioners as little as possible to avoid huge bills.

The progressive stage system was established during the 1970s oil crisis in order to save energy for industries. Since then, there have been many attempts to fix the law, but no progress has been made.

People who support the status quo say a change would only benefit middle and high income households. They believe any change would start with an increase in the basic price, which would hurt the poor.

The Trade Ministry on Tuesday said that the government is not charging ordinary households an excessive amount through the system.