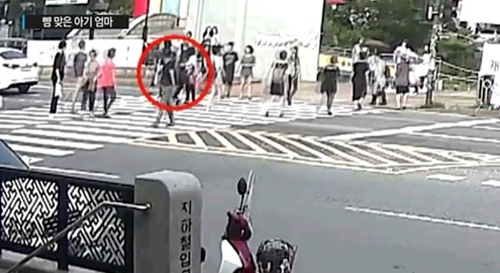 The story of a young mother being slapped by a middle-aged man after asking him to stop smoking in a non-smoking area has unleashed a fury online after it was revealed how police handled the case.

The mother, who was with her 7-month-old daughter when the dispute erupted, claimed she was booked with the same assault charges as the man who slapped her and investigated as a suspect, not a victim. The smoker claimed he was also pushed by the woman, a claim that was proven true when police watched CCTV footage retrieved from the scene.

Deeply unsatisfied with how the investigation was developing, the woman uploaded a post to an online community early this month in an attempt to gain public sympathy. The post went viral, leading many to wonder why police had pressed the same charges against her, and what she could have possibly done any better.

Police said Monday that they had sent the case to prosecutors, but asked that only the man be indicted, dropping all allegations against the woman. Officers explained that the man had since changed his mind and decided he did not wish to see the woman punished.

In a morning interview on radio channel CBS the same day, the woman said she heard from police that he was “sorry” for the assault, and that he must have been “crazy” that day. But she stressed that he has yet to apologize directly to her.

On July 30, the mother, who is in her 20s, was walking by an exit at Eungam Station on subway line No. 6 in Eunpyeong District, northern Seoul, when she saw a nearby man smoking a cigarette.

There was a red-and-white sticker on the ground that clearly stated no one was permitted to smoke within 10 meters (33 feet) of a subway exit, a law that has been implemented at all subway exits in Seoul since May. The woman was waiting to cross the street with her baby in a stroller.

Irritated, the woman asked the man to go someplace else to smoke, highlighting the fact it was a non-smoking area and that people were nearby. The man was said to have shot back expletives, saying, “It’s none of your business, ajumma,” addressing her with a term used for middle-aged women.

When the light turned green, she shot back, “Ajeossi [middle-aged man], you really could get fined if I call the cops. If you’re going to smoke, go someplace else.”

As the mother pushed her stroller across the street, the man walked towards her, yanked one of her arms and slapped her in the face.
The victim admitted during the same interview with CBS that she pushed him afterward, but stressed it was a defensive move, as she was trying to protect herself and her baby.