Park lunges back from the brink of defeat

Park lunges back from the brink of defeat 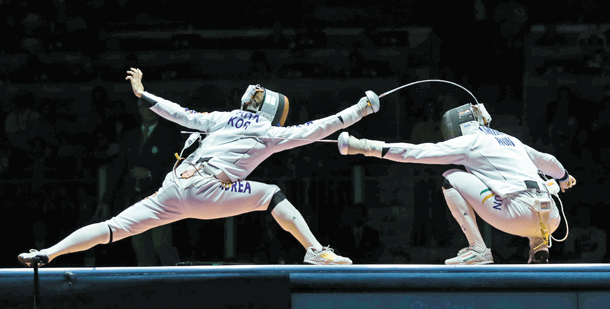 While some stars fade, others rise to glory. This is part of what makes the Olympics the epic affair that it is. And this year’s Summer Games in Rio de Janeiro, Brazil, is no different. Korean fencers such as Shin A-lam and Kim Ji-yeon, a gold medalist from the 2012 London Games, found themselves at one end of this story, while their teammate Park Sang-young found himself at the other end.

It was speculated before the Games that Korean fencers such as Kim and Shin would tally early golds, but it wasn’t until Tuesday when Park finally ended Korea’s medal drought in fencing, which had lasted the first three days of the Games. Park clinched gold in the men’s individual epee on Tuesday at Carioca Arena 3.

Ranked No. 21 in the world in men’s epee, Park was not deemed a favorite to medal in the men’s individual epee. This conjecture was backed by the fact that Park had suffered a critical knee injury and was out of the game last year due to surgery and rehab. It was not until December that Park returned to the piste. One year of absence was considered by many too great a defeat to come back from.

But Park proved everyone wrong, as he defeated high-ranking fencers one by one from the preliminaries to the final stages. He caught everyone by surprise when he edged the world’s No. 2 player, Enrico Garozzo of Italy, 15-12 in the round of 16 earlier in the day. Then in the finals, Park faced Hungary’s Geza Imre, who stands as No. 3 in the world. 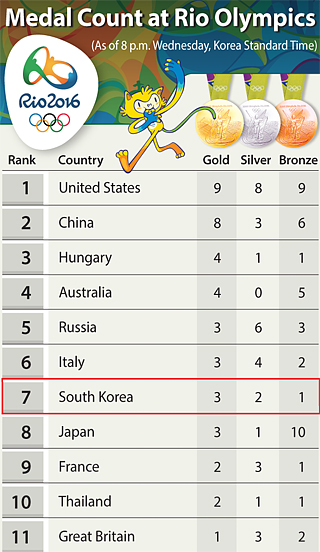 The match between the 20-year-old Korean and the 41-year-old Hungarian was framed as a battle between the ambition of youth and the experience of age.

By the end of second set, the Korean fencer had given out the lead to the Hungarian with a 13-9 score, and spectators were left thinking experience had triumphed over ambition, after all. No one expected his return, since Imre had only two points to collect before taking gold. But Park would emerge as the victor by taking down Imre with a 15-14 score in a dramatic comeback.

As soon as the final set started, Park and Imre traded a point each. With the score at 14-10, Imre needed only a point to conclude the match, and a gold medal in fencing would have eluded Korea once more. But even with all the odds piled against him, Park, on the verge of losing, fought on and gave it everything he had.

Before the third set started, he was seen murmuring, “I can do this.”

Then in the second minute of the set, Park quickly reeled in four successive points, evening out the match 14-14 with just over a minute to go. He then struck Imre explosively, tallying the final point with a fleche, his trademark move, ending the match.

“I am so excited to take my first Olympic medal,” said Park after the match, unable to control his emotions. “[In terms of strategy] the Olympics is a global festival so I just tried to enjoy myself as much as possible.”

Park joined the senior national fencing team when he was just 18 years old. He participated in 2014 Asian Games in Incheon as the only teenager on the team, competing in the epee event. Naturally, he was seen as a promising up-and-comer who would lead Korean fencing in the coming decade. But he was left high and dry when he tore the ACL in his left knee. He had a surgery in last March but was unable to start training again until December.

“There were times where I wanted to quit,” recalled Park. “Whenever I heard someone say I was finished, I felt completely devastated. Even recently, I could feel something wrong whenever I skipped a rehab session. If I had to do a lot of lower body training, my knee would swell up. I am just thankful my knee was able to hold together in a crucial moment.”

Along with his gratitude towards his knee, the 20-year-old Olympic champion was also filled with pride as a fencer.

He added, “I won Olympic gold at least three times in my dreams [at night],” Park said. “I pushed myself harder to get to the Olympics.”

Park is now the first fencer in the history of Korean fencing to claim Olympic gold in individual epee and the third fencer overall to take individual gold. Kim Young-ho, a foil fencer, won gold at the 2000 Sydney Games and Kim, a sabre fencer, won gold in 2012.

Now Park will try to slash his way to the podium once more during the men’s epee team event next week. “My teammates cheered me on throughout the match and now it is time for me to reciprocate their support. I came here to take gold for the team event,” Park claimed.