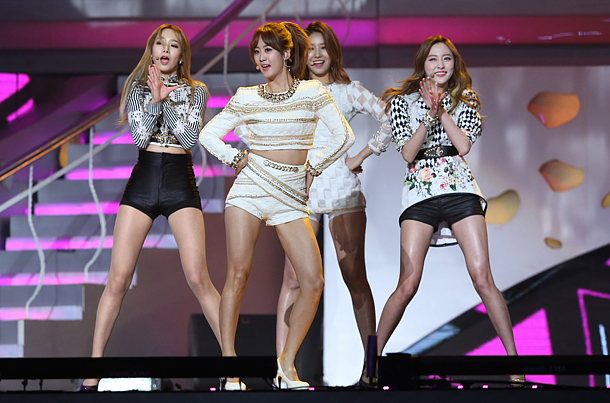 K-Pop group BESTie performs in a concert hall in Beijing for the 29th Golden Disk Awards in 2015. [KIM JIN-KYUNG]

South Korean soap stars are unlikely geopolitical pawns. But with the Chinese government furious over South Korea’s decision to host a U.S. anti-missile battery on its soil, that’s exactly what they’re becoming. In the past week, public appearances by Korean television and music stars have been postponed and even canceled in China, while shares in some of South Korea’s biggest entertainment companies have sunk over fears that the country’s cultural exports are now in the line of fire.

The threat is real. Hallyu, a blanket term for South Korea’s wildly popular film, television and music products, has become an economic and cultural juggernaut in East Asia. Last year, exports of South Korean culture surged by 13.2 percent, accounting for tens of thousands of jobs, even as the country’s total exports declined by 8 percent. The benefits don’t flow just to the studios, either: In 2014, one popular Korean soap generated nearly $500 million in economic activity, including through tourism and cosmetic sales (the lipstick favored by the lead female character was particularly popular). Nobody is buying more — or watching more — than the hundreds of millions of rabid Hallyu fans in China. And despite their government’s best efforts, they’re unlikely to change channels.

The sheer intensity of Chinese enthusiasm for Hallyu is difficult to exaggerate. In April, a new episode of “Descendants of the Sun,” a military-themed melodrama, rang up 2.3 billion Chinese views in just two days. For weeks, Chinese social media was overwhelmed by discussion of the show, while the traditional news media reported on all kinds of related manias, including a fan who (allegedly) nearly went blind binge watching the series. The situation became so extreme that China’s Ministry of Public Security warned that watching Korean dramas could lead to divorce, legal troubles and gratuitous plastic surgery (a distraught Chinese husband evidently sought out face work after his wife fell for a Hallyu actor).

To an extent, all this enthusiasm is by South Korean design. In the 1990s, as the Korean government sought to diversify its economy beyond manufacturing, entertainment became a favored vehicle. Ever since, upward of 1 percent of the government’s hefty budget has been spent on culture.

South Korea also has one major advantage over China in the culture business: Its creative class isn’t subject to censorship. In China, television has been obsessed with two politically safe subjects — historic dramas set during the imperial dynasties and World War II — for three decades. Though there are exceptions, the writing tends to be awful, the characters wooden and the production values poor. Even a casual viewer can sense the difference when a Hallyu drama comes on the air. The production is first-rate, the scripts are extremely well written and the subject matter (typically family dramas and romance) are relatable.

But more important, the Hallyu shows are quite skillful at expressing the values of contemporary South Korean and Chinese society, including respect for traditional gender roles and an enthusiastic materialism. One of the most significant is the belief that social class determines character — and social class can be bought. Unsurprisingly, Cinderella stories, in which a rich “prince” transforms the life of a hard-working (and beautiful) middle-class girl, are among the most enduring Hallyu tropes. Likewise, K-pop, the energetic musical genre that’s crossed over into China, eschews the transgressive elements of Western pop music for a more wholesome image that plays well in East Asia.

This hasn’t gone unnoticed in Beijing. In 2014, Wang Qishan, China’s feared anti-corruption czar, outed himself as a casual viewer of Korean dramas at a National People’s Congress meeting (he’s also rumored to be a “House of Cards” fan). “The core and spirit of Korean dramas is the exact sublimation of Chinese traditional culture,” he told the meeting. Meanwhile, China’s most influential military newspaper has praised “Descendants of the Sun” as an ideal advertisement for conscription — one that should be copied.

All of which suggests that China’s retaliatory strike against South Korean soaps is likely to be limited. South Korean culture speaks Chinese values and aspirations in a way that much modern Chinese entertainment simply can’t. Cutting off access to it — even in the heat of a diplomatic spat — would only highlight how unsuccessful China has been in fostering homegrown competition and voices. In the war for Chinese hearts and minds, South Korean soap stars are clearly the winners.