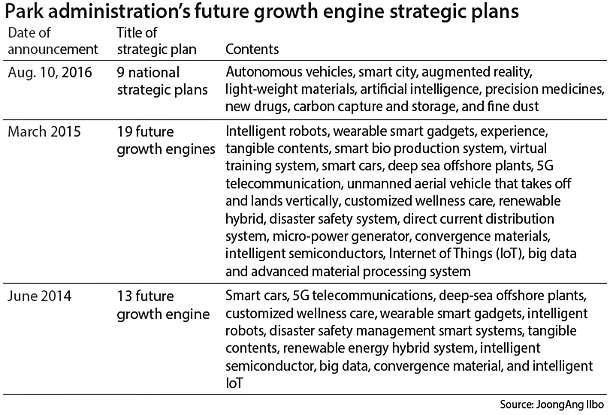 The government announced Wednesday its plan to strongly promote nine new growth engines targeting the development of artificial intelligence, autonomous vehicles and technologies that would cut pollution created by fine dust in 10 years.

At a science and technology strategic meeting at the Blue House with President Park Geun-hye, the government named the growth engines, for which it will allocate 1.6 trillion won ($1.5 billion) over 10 years. The government expects the private sector to invest 615.2 billion won in the projects.

The government’s plan comes amid rising concerns over Korea’s economic potential. Although Standard and Poor’s this week raised Korea’s status on the global community to a higher rate that exceeds rivals like China and Japan, it has become clear that the traditional manufacturing industry’s structure has run its course especially with the decline of Korea’s exports, which have fallen for 19 months.

With major global companies like Google expanding its influence on the information and communications global technology front, the government is targeting fundamental technologies to insure Korean companies are competitive while reducing costs.

“The artificial intelligence that shocked us with AlphaGo or augmented reality that was represented by the recent phenomenon caused by Pokemon Go shows the huge changes and innovation that ICT technology can bring to an economy and society,” Park said Wednesday.

“When thinking about the massive changes in the global market that are to take place due to the fourth industrial revolution and that the nation’s competitiveness and the job opportunities of young people depend on it, [I] feel urgent and can’t afford to let [my] guard down.

“If we miss this timing where major changes of the fourth industrial revolution are happening it will not only be difficult but also impossible to eventually catch up.”

She added that facing a new normal of low growth, low inflation and low interest rates, finding new growth areas is a desperate assignment. “As the future of a country hangs on who will become the first in developing innovative technology, we have to act swiftly on a nationwide level,” Park added. The government plans to finalize plans in the second half.

Korea’s science community wasn’t too impressed with the plan as strategies have frequently changed under Park. The government announced similar plans, once in June 2014 and again in March 2015.

“The names that were presented during the science and technology strategic roadmap in 2014 have been renamed and rearranged, which is very concerning,” said Kim Hong-ryul, a professor at the Korea Information Society Development Institute.