Tax revenue up in first half

Tax revenue up in first half 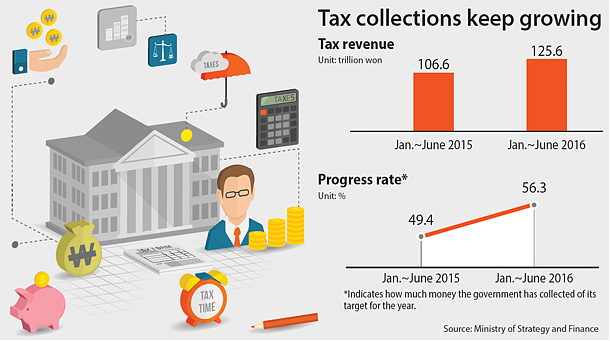 The government collected more taxes during the first half of this year compared to last year, but it also warned that domestic and foreign factors may result in less optimistic numbers in the second half.

The Ministry of Strategy and Finance announced Wednesday that it collected 125.6 trillion won ($114.9 billion) in tax revenue this year up to the end of June, a 19 trillion won, or 17.8 percent, increase year on year.

The amount collected accounts for 56.3 percent of the government’s 2016 target of 222.9 trillion won. This also is an increase of 6.9 percentage points year on year.

“Companies have become more profitable, and private consumption in the first half of this year improved,” said Chang Jung-jin, a director at the Ministry of Strategy and Finance.

Domestic consumption continued to grow this year compared to the previous year. In the fourth quarter of last year, consumption rose 3.3 percent year on year, and the figure for the first quarter of this year rose 2.2 percent.

Revenue from income taxes, which makes up the largest component, also increased 4.9 trillion won, or 6.4 percent, from the previous year, hitting 35.5 trillion won as of the end of June.

“An active real estate market helped boost the income of people who rent out spaces, and average income rose in general,” Chang said. “Furthermore, the number of self-employed who filed their tax documents increased compared to the past.”

The ministry also pointed out that the rest of the year might not be so positive.

The government’s tax and non-tax income in the first six months of this year rose 20.7 trillion won compared to the same period last year to record 207.1 trillion won.

“Deficit increased compared to the previous month due to the government’s fiscal policies including the early execution of government spending,” Chang said. “We have collected more tax revenue this year, which is a good thing, but we still think that there are various uncertainties that might have negative impacts in the second half of this year.”

Chang noted that the recent expiration of an individual consumption tax cut on vehicles, ongoing corporate restructuring in the shipping and shipbuilding industries and volatile currency issues might affect the government’s tax revenue in general during the second half.

“We will monitor closely in order to reduce negative impacts coming from such factors,” Chang said.